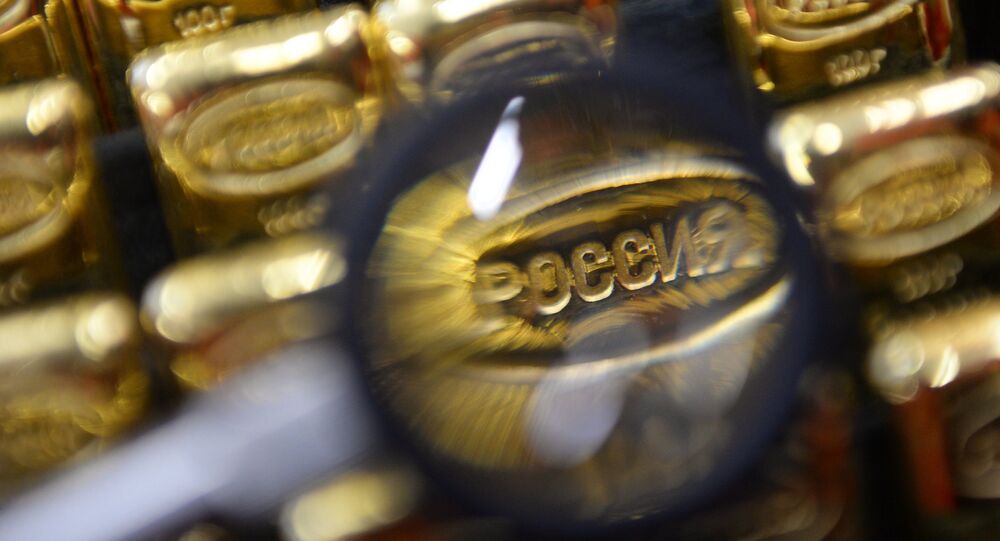 The Central Bank of Russia became the world's leading purchaser of gold when it bought 356,000 ounces of the precious metal in February, according to the International Monetary Fund (IMF).

© CC BY 2.0 / Bullion Vault / gold bar on coins
Gold Becomes This Year’s Best-Performing Asset
At least 356,000 ounces of gold were bought by the Central Bank of Russia last month, making it the largest buyer of the precious metal among the world's central banks, an IMF report said.

China took second place; its Central Bank purchased about 320,000 ounces of gold in February, according to Chinese Central Bank officials.

With a seven-day period, Russia increased its gold and foreign exchange reserves by 1.5 percent. From March 1, the reserves rose by 1.7 percent, from $380.5 billion.

© Sputnik / Pavel Lisitcin
Reasons Why Investors Should Place Stakes on Silver Against Gold
In mid-December 2015, the Russian Central Bank announced that it would increase Russia's gold reserves to $500 billion within the next five years. The terms would depend on the macroeconomic scenarios the government intends to implement.

Gold is considered to be a buffer against external economic risks and is currently in favor in Russia, one of the world's largest oil exporters, which was hit by a slump in global oil prices.