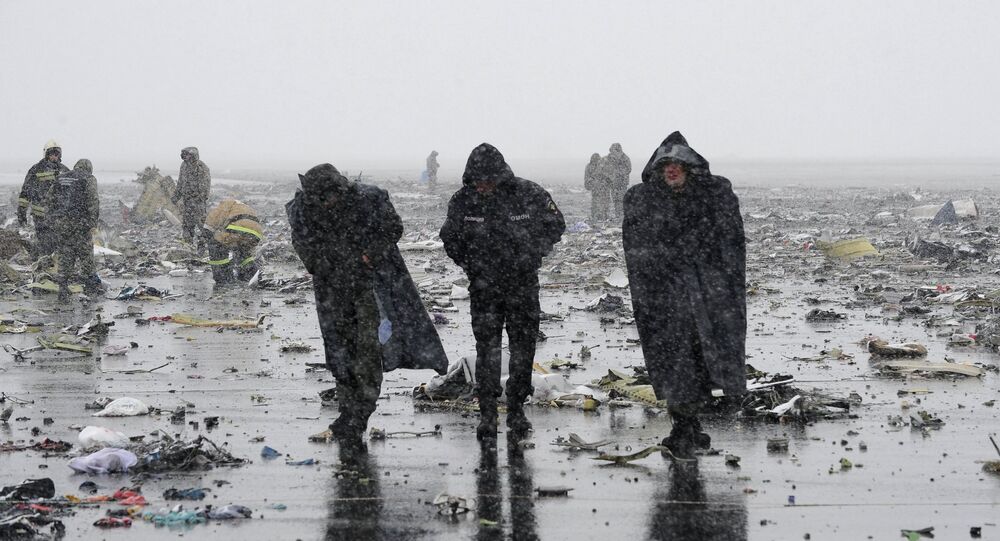 The co-pilot of the FlyDubai plane that crashed in Russia last week was extremely exhausted after working 11 days in a row ahead of the fatal flight, a former FlyDubai pilot told RT in an interview.

MOSCOW (Sputnik) —  On Saturday, the FlyDubai Boeing 737-800 crashed while landing at Russia’s Rostov-on-Don airport, killing all 62 people on board.

"There's is no doubt he was fatigued and exhausted for this flight… that definitely was a contributing factor, no matter how they may try to deny it," the ex-pilot said, adding that the co-pilot of the crashed plane was working for 11 days in a row, with only one day off.

He added that excessive workloads for the FlyDubai pilots were common practice as the operator arranged the schedule which did not allow the pilots to get enough rest before flights.

According to the former pilot, a poll had been conducted among the FlyDubai pilots, in which 80 percent said that there could once be an accident due to extreme employees’ fatigue.

"And it’s unbelievable, I mean they knew this was coming, they absolutely knew it and of course they will blame it on the pilots," the ex-pilot said.

© Sputnik / Stringer
FlyDubai Boeing Crash: Possible Causes of Accident
According to him, there have been several cases when FlyDubai pilots have fallen asleep in the plane.

The ex-pilot stressed that one FlyDubai pilot filed a safety report to the company, saying that he "fell asleep after taking off from one of the out stations and they were probably asleep for about eight minutes."

The Russian Investigative Committee has been working to determine the cause of the crash together with Moscow-based Interstate Aviation Committee (IAC or MAK). They are expected to be joined by foreign experts.

On Monday, the Russian Rossiyskaya Gazeta newspaper, citing sources familiar with the investigation, reported that the crash could have been caused by the plane steering gear getting locked because of low temperatures.