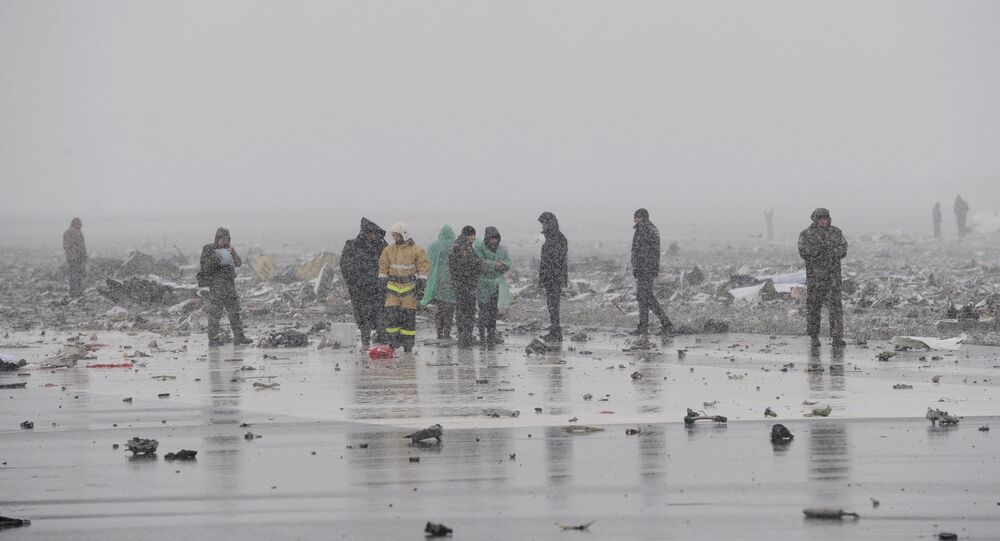 A terrible incident marked this weekend in Russia – the FlyDubai Boeing-737-800 crashed in the early hours on Saturday in the southern Russian city of Rostov-on-Don, killing all 62 people on board. Sputnik takes a closer look at what could have caused the crash.

The FlyDubai Boeing-737-800 en route from Dubai to Rostov-on-Don crashed at the city's airport at around 3:40 AM Moscow time (00:40 AM GMT) Saturday after missing the runway amid poor visibility and bad weather conditions. All 62 people on board including 55 passengers and seven crew members died in the accident.

According to the Investigative Committee, the crew failed to land the plane during the first attempt and spent over two hours flying around the airport hoping to find a good moment for another takedown. Finally, the plane went for the second landing attempt during which it crashed.

© Flickr / Woodys Aeroimages
Russian Emergencies Ministry Publishes List of FlyDubai Crash Victims
At the time of the crash the wind is reported to have reached 22 meters per second and it was cloudy and rainy. According to the head of Transport Committee of the Russian State Duma, Evgeny Moskvichev, poor weather conditions could have been the main reason of the plane crash.

"The fact that the plane was circling around the area for two hours while other planes left to other airports suggests that the wind was very strong," Moskvichev explained.

The Dubai Aviation Corporation [which trades as FlyDubai] thinks the weather conditions played no part in the crash.

"If the weather was unsuitable then the plane wouldn't have flown [to Rostov-on-Don]," FlyDubai CEO Geit Al Geit said.

© Sputnik / Stringer
Captain of Crashed FlyDubai Plane Had Almost 6,000 Hours of Flight Experience - FlyDubai CEO
Editor-in-Chief of the aviation online portal Avia.ru Roman Gusarov said human error was the cause of the crash. Although captain Aristos Sokratous had almost 6,000 flight hours, he could have made a couple of serious mistakes. First, a bad judgment call by deciding to land the plane during poor weather conditions and then making a piloting mistake during the landing.

The aviation expert suggested that the crew captain was probably asked to fly away and land on a reserve airport, as it's a common practice in aviation.

"If a pilot realizes that the weather conditions are such that he won't be able to make a landing, an airport air communicator always offers an alternative landing spot, especially if the plane was flying above the airport for two hours. There can't be any accusation against airport personnel. A decision to land is made by the captain," Gusarov explained.

© REUTERS / Russian Emergencies Ministry/Handout
Russian Transport Watchdog to Inspect FlyDubai Operations in Russia After Crash – Minister
Russian authorities are also investigating whether a technical failure may have been the cause of the accident. Investigators suggested it might have been a mechanical fault that forced the Boeing to stop its initial attempt to land on the runway over two hours prior to the crash. Another question is why the crew took so long between the two landing attempts. Was it because they were trying to fix a technical problem?

Boeing said it would provide Russian investigators with technical consultations.

"Under the direction of the US National Transportation Safety Board, Boeing is launching a team and will serve as technical advisor to the investigating authority in charge, the Russian Interstate Aviation Committee," the company said in a statement.

The investigation into the Boeing crash is expected to take two months, according to Oksana Kovrizhnaya, a spokesperson for the Russian Investigative Committee.

"The terms of the investigations are set by [Russia's] criminal code — two months. But they could be prolonged because of the inspections' duration," Kovrizhnaya said.

Flight recorders [black boxes] from the FlyDubai Boeing 737-800 have been found and are in good condition.

As of now the main phase of the search operation at the scene of the plane crash has finished. All the victims' bodies were collected and sent for a forensic analysis.

Russian President Vladimir Putin expressed his condolences to the families of all the victims. Sunday has been declared a day of mourning across Russia.