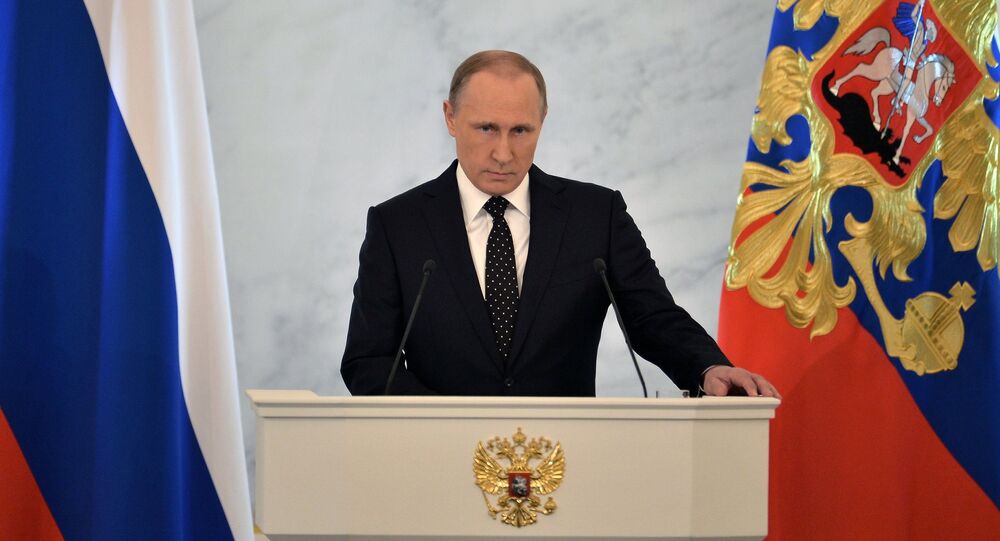 © Sputnik / Ramil Sitdikov
Syrian Fait Accompli 'Shows That Putin Holds Main Trump Cards in His Hands'
Russian President Putin praised the effectiveness of the work of the Russian air group in Syria, which has been partly pulled out from the country. He also said that the operation in Syria has shown the increased power of the Russian military.

The Russian president said that the Russian Defense Ministry had spent 33 billion rubles (more than $464 million) on the military campaign in the Syrian Arab Republic.

Putin said that expenses on Russia's anti-terror campaign "were fully justified and necessary."

© Sputnik / Ramil Sitdikov
What’s Behind the Move? Most Discussed Ways to View President Putin’s ‘Syrian Surprise’
The Russian operation in Syria was a more effective training for the country's military than drills, he added.

The commander-in-chief added that the funds have been redirected to supply the assets in Syria, asserting that "no one has yet invented a more effective way of training and honing skills than actual combat operations."

He noted that "only in the battlefield could many of what was used to genuinely test, identify existing problems and fix them."

Putin said that the Russian air campaign in Syria has created conditions for the peace process in the war-torn country.

"The most important thing is that we have created conditions for the peace talks, we have managed to establish positive cooperation with the United States, as well as a number of other countries, with those opposition forces in Syria which really want to stop the war and find an only possible political solution to the conflict."

Russia will continue to aid Syria, including military and intelligence support. The Russian leader reiterated Russia’s readiness to support Damascus in the fight against terrorist groups operating in Syria, which are outlawed by the UN Security Council.

"Of course, we will continue to support the Syrian legitimate government. It will be financial aid, arms supplies, military training… It will be intelligence support, aid in the planning of operations, as well as direct support — the use of the Russian Aerospace Forces."

Putin commented on the operation carried out by the Syrian army aimed at the liberation of Palmyra.

"I hope that this pearl of the civilization will be returned to the Syrian people."

The Russian Aerospace Forces have carried out over 9,000 sorties during the anti-terror operation in Syria. The number of sorties conducted by Russian warplanes has decreased three times after the ceasefire had been reached, he said.

According to Putin, Russia may boost the air group in Syria "in literally a few hours."

"If needed, Russia can boost its air group in the region in literally a few hours to a size corresponding with the situation and use the whole arsenal of our opportunities. We would not like to do that as military escalation is not our choice, that's why we  rely on the common sense of all parties, on the commitment of the [Damascus] authorities and the opposition to the peace process."

Russia will use its air defense systems in Syria to target anyone threatening its military personnel, Russian President Vladimir Putin said Thursday.

"We are acting according to fundamental international norms, no one has the right to violate Syria's sovereign airspace. An effective mechanism for preventing air incidents has been established with the American side, but all partners have been notified and are aware that our air defense systems will be deployed against any targets that we will consider to be a threat for Russian service personnel. I stress that these will be any targets."

The balance of power in Syria would be maintained after the pullout of the Russian forces, Putin said. The Russian leader added that Damascus had gained the strategic initiative and continues to defend its land.

He added that Russia has strengthened Syrian government forces, which are now capable of successfully fighting against terrorism.

"We have strengthened its [Syria’s] Armed Forces. Today, they are able not only to deter terrorists, but to conduct a successful offensive against them," Putin said at a ceremony awarding the forces involved in Russia's counterterrorist campaign in Syria.

© AFP 2021 / JOSEPH EID
In Putin We Trust: Global Community 'Should Rely on Presidents of Russia, Syria'
The Russian president said that he hoped that all interested parties would consider Russia's partial withdrawal from Syria as "a positive signal."

Putin also noted the stance of the Syrian President Bashar Assad, saying that "we see his restraint, sincere desire of peace and willingness to compromise." The Russian leader added that Damascus would not fight against armed Syrian opposition groups, as agreed under the US-Russia ceasefire plan, which came into effect on February 27.

Russia has shown leadership and responsibility in its counterterrorist mission in Syria, the Russian president noted.

He noted that the servicemen’s "hard work radically changed the situation, we did not allow the terrorist tumor to grow" and expressed gratitude to those involved in the campaign for their "devotion to their fatherland."

"Russia is proud of you. It is proud of its soldiers and officers who defend the interests of the country with high professionalism and courage," the commander-in-chief added.

The modern Russian weapons has passed the most severe combat tests in Syria, Putin said.

"Today, I would like to express gratitude to the representatives of Russia's defense industry — to workers, engineers, designers. The modern Russian weapons have passed the test, and not on the firing range, but in the real world, in the fight. This is the most severe test. This experience will allow us to make the necessary adjustments to improve the efficiency and reliability of the technology, to create a new generation of weapons, improve the armed forces to increase their combat capabilities," Putin said during the award ceremony in Moscow.