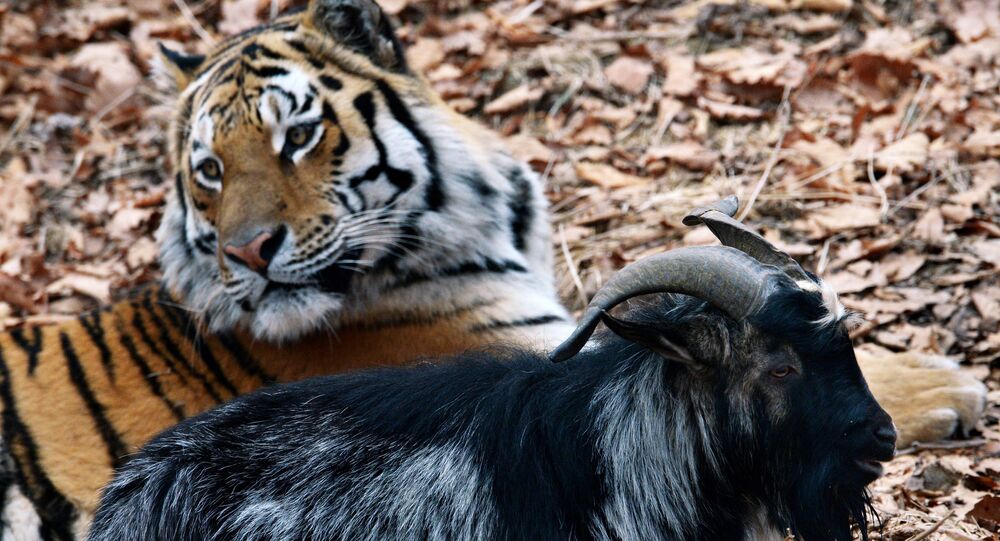 Ignoring a bevy of wannabe “fiancées” Timur the goat of tiger-meets-goat fame, preferred the company of his striped buddy instead.

© Sputnik / Vitaliy Ankov
International Stardom: Goat Timur and Tiger Amur to Get Accounts on Chinese Social Media
The first thing Timur did during a carefully planned “date” with his would-be wife, was to rush to meet his good friend Amur the tiger, the management of a safari park in Russia’s Far East said on Tuesday.

The park had earlier announced a contest for the most beautiful she-goat to “wed” Timur. Of the eight potential fiancées two hail from the Volga region and one is a Moscow region native.

“The first stage of the contest for the best she-goat for Timur was on March 8. The candidates were in the park, waiting for their future husband.

But instead of joining them Timur rushed to meet his old chum Amur and only then did he finally agree to go and see his fiancées. Therefore, Amur the tiger was named first-round winner,” the park’s management said in a statement.

According to the park’s director Dmitry Mezentsev, his workers will see how Amur is getting along with the pretenders before they name the lucky winner. The opinion of the park’s visitors will also be taken into consideration.  The winner will live with Timur.

Timur and Amur have been living in adjacent pens since January 26 when the cheeky Timur was slightly injured by his striped pal and taken to a veterinary clinic for treatment.

“Timur has fully recovered. He now lives in the park and can walk freely among the visitors,” Mezentsev said.