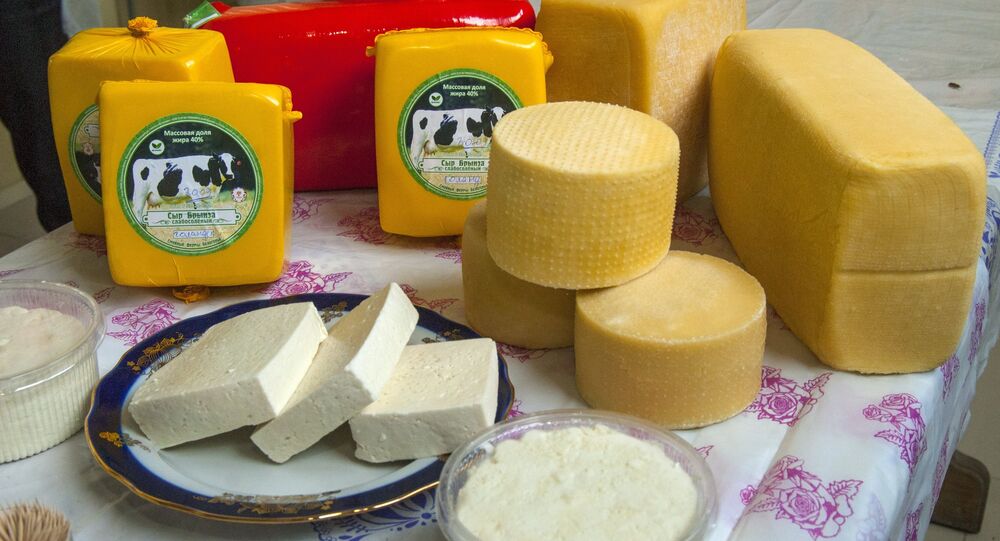 French cheese has returned to Russia, after an enterprising farmer invited French cheesemakers from Corsica to his farm where they have passed on the secrets of making fine French cheese.

© Flickr / Emily
Sweet Dreams Are Made of Cheese: Italian Ambassador Sounds Off on Russian Cheese
French cheese was one of the casualties of the Russian counter-sanctions on food, agricultural products and raw materials from the EU and some other countries that were imposed in August 2014.

While some in Russia have lamented the paucity of Brie, Roquefort and other well-known cheeses, a resourceful farmer in Russia's Lipetsk region has turned the situation to his advantage.

"I invited French cheesemakers to my farm in the Lipetsk region, who gave lectures and seminars about cheesemaking," explained Borev, who has 18 goats, more than 30 sheep, ten cows and five horses on his farm.

"Every month we make a ton of goat's cheese, which is very popular. There is high demand for it even among French people living in Moscow, there are a lot of customers."

"At the moment we are building a dairy which can produce 12 tons of cheese a month."

"I must say thanks for the European sanctions, because thanks to them we are eating French cheese that is even better than before."

"In the past cheese was mass produced, now we are delivering better-quality farmer's cheese to the Russian market. It is made in Russia, but professional French cheesemakers are here to help with its production."

© Sputnik / Nikolay Hiznyak
Camembert cheese production in Krasnodar Territory
Borev previously worked as a journalist, and also studied medicine at the Sorbonne in France. He told local media that he is a Francophile, and spent a long time looking for the right French partners for his cheese-making enterprise.

"I must admit, I love France and its traditions, culture, cuisine. Their cheese is not just food. It reflects the country's philosophy, traditions, centuries of history which must not be lost. I searched for a long time to find the best cheesemakers in France. And I found them – Nicole and Gilles de Vouch."

The couple lives on the island of Corsica, where they have a farm with 120 goats. They previously made cheese in the Burgundy, Thurins and Toulouse regions of France.

"I was most captivated by the old stone cellars in (the village of) Maslovka. Vladimir has 12 of them at his farm, and they are probably two or three hundred years old. They are unique, priceless. The mould which we brought from France took root and spread instantly. So your region is a dream for French cheesemakers," Nicole told Lipetsk Media.

© AP Photo / Markus Schreiber
Dialogue Beats Sanctions: Germany Should Have Known Russia Wouldn't Flinch
Nicolas Faine, a farmer in southwest France, was also a student of Nicole and Gilles de Vouch and has traveled to Russia to meet with Borev and exchange expertise.

"The de Vouch family were my teachers in cheesemaking, who introduced me to Vladimir," he told Sputnik.

"This is my first trip to Russia in the context of this project, and we are laying the foundations for a system of sister-companies. This is one of my ideas: to join two agricultural enterprises and exchange experience."

Faine said that his interest in cooperating with a Russian cheesemaker is, like Vladimir Borev's passion for France, borne of a close relationship with Russia.

"For us, Russia remains somewhere very far away, but people love Russians like they are brothers."

EU-Belarus: Lessons of the Sanctions War