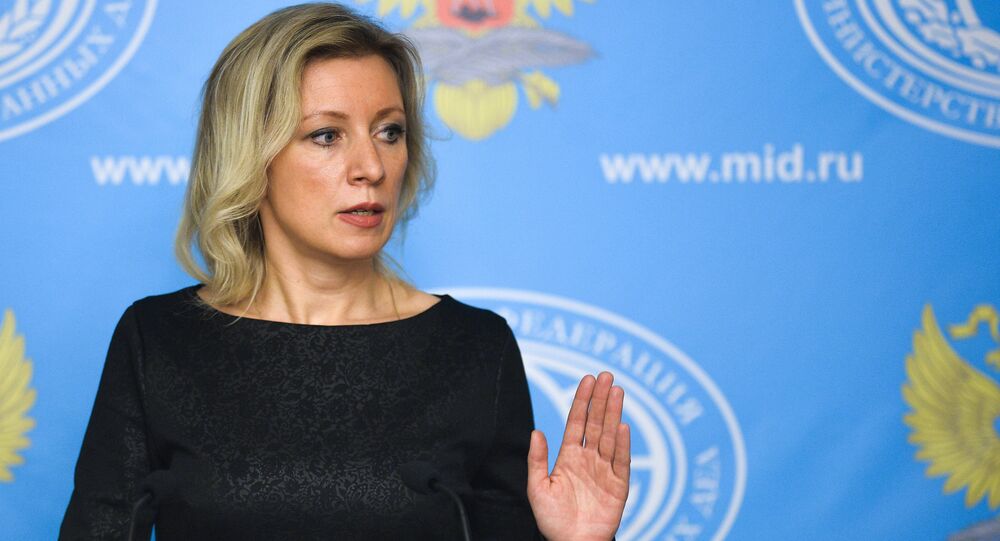 Russian Foreign minister Sergei Lavrov will participate in celebrations dedicated to the Diplomat's Day on February 10. On this day we will pay tribute to our colleagues, who died during the Great Patriotic war. Related events will take place in our missions around the world.

Russian Foreign minister Sergei Lavrov will also participate in the Munich Security conference on February 12-14. The main topics will be the fight against terrorism and the European migrant crisis.

Talking about Germany, last week we informed the media about an investigation into sexual harassment against a Russian girl in Berlin. The German interior minister said that all the information on the issue will be provided to the Russian side and an investigation will be undertaken. However, we still have not received any information from them.

On Friday, the highly-anticipated talks on Syrian reconciliation mediated by the United Nations began in Geneva in line with the December UN Security Council's resolution on the Syrian settlement. On Wednesday, UN Special Envoy for Syria Staffan de Mistura decided to postpone the Syrian peace talks in Geneva until February 25.

Some people have alledged that the talks were postponed due to the Russian operation in Syria.

"Let me remind you, that Russian aviation has targeted only terrorists in Syria," Maria Zakharova told reporters. "With Russian assistance, the Syrian army was able to break the four-year siege of two Syrian cities —Nubel and Al-Zuhra."

During a weekly press conference, Zakharava stated that Moscow hopes "the visit to Russia will allow the special representative to prepare in due time a solid and — this is very important — unbiased and balanced report to Secretary General of the Council of Europe [Thorbjorn] Jagland."

On January 25, Gerard Studman, special envoy of the Council of Europe’s head, visited the Crimean peninsula at Russia’s invitation to prepare a report on how Moscow is fulfilling its commitments under the European Convention on Human Rights.

Ukrainian provocations against Russian officers on the Russian-Ukrainian border are unacceptable and the consequences from that will lie with Kiev, Russian Foreign Ministry spokeswoman Maria Zakharova said Thursday.

“The provocation made by the Ukrainian side, of course, is absolutely unacceptable. All responsibility for possible negative consequences of the incident will fully lie in the hands of the Kiev authorities,” Zakharova said.

The Ukrainian Charge d'Affairs was summoned to the Russian Foreign Ministry in Moscow earlier on Thursday, who was given a protest in regard to the incidents on February 2-3 at the Gotovka-Nekhoteyevka border control crossing on the Russian-Ukrainian border, Zakharova added.

Answering the question about the Minsk Agreements and who is creating obstacles to their implementation, Zakharova stated the issue is very important. First of all it is necessary to understand: the longer the constructive talks are delayed, the more dangerous the situation in Ukraine becomes.

"Statements by this country's Foreign Minister [Mevlut] Çavusoglu… are absolutely unacceptable," Zakharova said, deeming such claims a form of blackmail.

"None of the planes from the Russian aerial group have violated Turkish airspace. None of them," Maria Zakhariva said.

Ankara has not presented any evidence to back up the allegations.

"We have no answer to an official request on the incident," the Foreign Ministry's spokeswoman added.

"All our requests on details on the origin of that information have not been answered," she said.

"Of course, it is sad that this line of provocation carried out by Ankara is supported by the United States," Zakharova told reporters.

NATO and its member are in fact covering up activities of Turkey in Syria.

"We've repeatedly spoken about problems on the Syrian-Turkish border. But it seems all the ungrounded accusations against Russia are used as a pretext by Turkey for its own military build-up," Maria Zakharova said.

The Russian Foreign Ministry has not received any official notification on the introduction of a visa regime. But if anyone is planning a business trip to Turkey, they should clarify the information.

A BBC program explores a hypothetical WWIII scenario, where Russia invades Latvia after Russian nationalists boil over regarding their lack of self-determination in Latvia. Russia then launches a nuclear strike on the British military.

"It seems our British colleagues are trying to present Russia as the world evil. It's a new level of information aggression," Zakharova said.

"It seems like British journalists forget about fact checking. The claims that we hear are, certainly, absurd. For example the statement that the Russian military operation in Syria is stimulating civil war in the country. Let me remind, that Syria has been in a state of civil war since 2011," the spokeswoman added.

This is pure propaganda, she noted.

"I would like to ask the British media: don't you feel that you are just being used in a propaganda war?" Maria Zakharova said.

Zakharova also added that there is no such thing as "Russian agression," answering a question about the new arms race with the West. Russia has always chosen peace over war, the spokeswoman noted.

John Kerry said that Russia and Syria are trying to achieve a military solution to the Syrian crisis.

"Our targets in Syria are clear. We're fighting terrorism. We can distinguish between the opposition and terrorists," Zakharova said.

The Russian Foreign Ministry is doing its best to prevent the worst scenario, Zakharova assured.

North Korea's ambassador has been summoned to the Russian Foreign Ministry's office Thursday over the country's upcoming satellite launch.