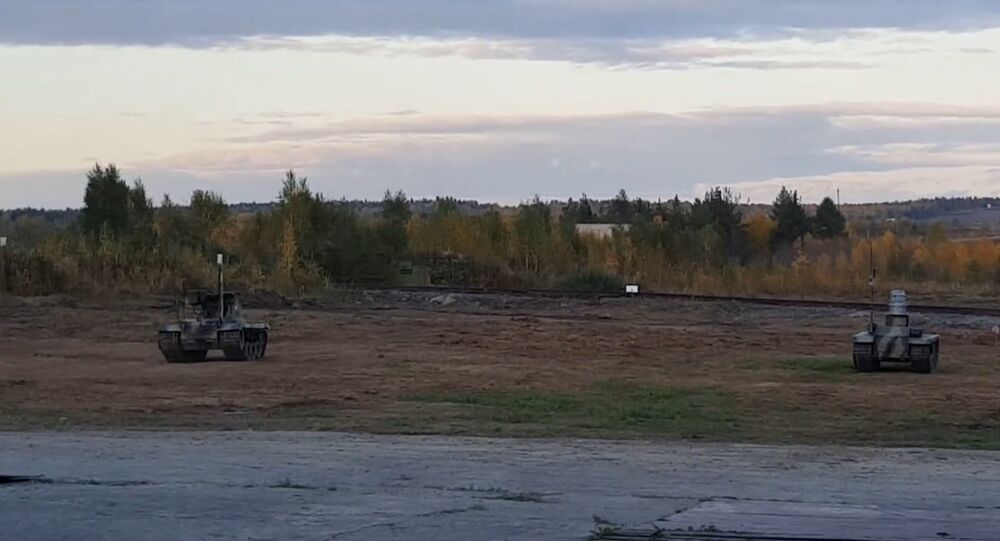 Russia is rolling out a wide array of innovative robotic machines to optimize the performance of its armed forces in 2016.

"Advanced robotic systems of a new generation designed for military application are tested within the framework of development work. A number of them will be delivered to the army in 2016," Col. Gen. Pavel Popov said in an interview with Krasnaya Zvezda (Red Star) newspaper.

In the next decade remote-controlled and robotic platforms will account for about 30 percent of the Russian combat power in addition to dozens of land- and sea-based robotic systems as well as hundreds of UAVs already used by the Russian military.

© Photo : Sony Pictures Releasing CIS
Rise of Machines: Robots Could Wage War Against Humanity by 2055
Robotic scouts, sappers and firefighters were all part of a unique display of automated combat machines unveiled during last year’s Army-2015 military exhibition outside Moscow.

Platform-M is the latest such robotic combat system, created to fight without entering into contact with the enemy.

Armed with a grenade launcher and a machinegun, it is a universal combat unit ideal for reconnaissance and patrol missions, as well as for guarding important sites.

The Uran-6 is a multipurpose demining robot, powerful enough to replace 20 sappers.  It can be remotely operated from a safe distance of about one kilometer.

“Armed” with bulldozer blades and trawls, the Uran-6 detects, identifies and destroys mines containing up to 60 kilograms of TNT. Its companion, the Uran-14, is an obstacle-breeching and fire-fighting robot.

The Argo remotely-operated robotic platform can also swim, which makes it an ideal means of fire support for Marine landing units. The Argo is armed with a single 7.62mm machinegun and a troika of RPG-26 rocket-propelled grenade launchers.

The list of military robots slated to enter active service in 2016 also includes the YULA-N mobile mini-robot. Weighing about a kilogram, it can transmit information to an operator up to 100 meters away for a whole two hours non-stop.

And, of course, one should mention the Kadet – a miniature scouting robot which can also be used to haul small cargoes.