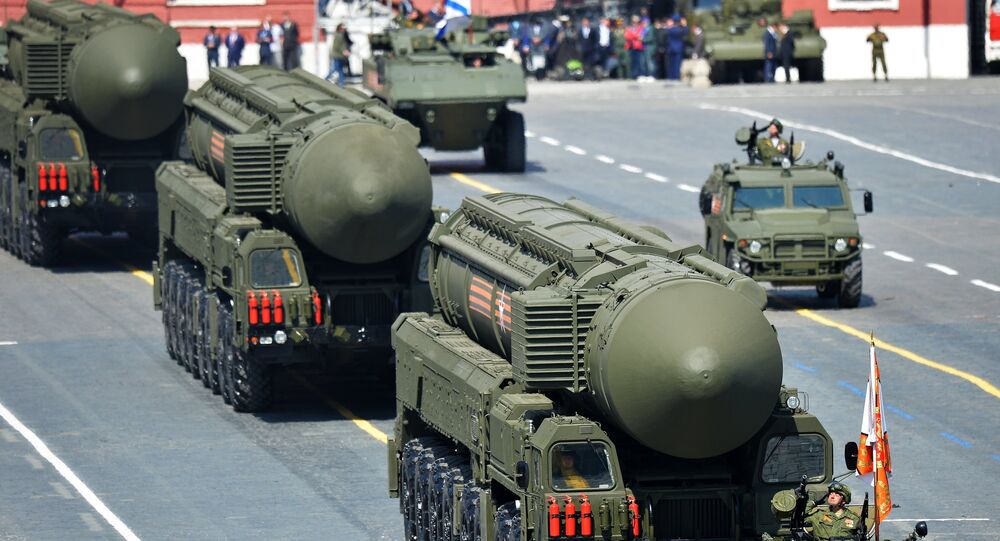 The outgoing year has become a significant year for the Russian military and proved Moscow’s ability to withstand external pressure.

Sputnik made up a list of the five most significant Russian military events of 2015.

© Sputnik / Evgeny Biyatov
Putin: Russia Will Further Strengthen Armed Forces
The event that took place on May 9, 2015 on Moscow’s Red Square was to commemorate the 70th anniversary of one the greatest victories of the Russian military. The commemoration was ignored by the leaders of many nations which were Soviet allies in the fight against the Nazis, including the US, Britain and France.

The parade involved 16,000 troops, 143 military aircraft and helicopters and 194 pieces of military hardware.

Among them were Yars missile systems, Iskander-M tactical missile systems, Msta-S self-propelled guns as well as advanced air-defenses, including the Tor-M2U, Pantsir-S1, and the S-400 Triumf.

In addition, a number of armored vehicles were displayed, including T-90 tanks, and BTR-82A, Rakushka and BMD-4M armored personnel carriers.

The demonstration of advanced armored vehicles – the Armata and Kurganets platform as well as the Bumerang wheeled platform – stole the show during the parade. An entire series of weapons had been designed using the Armata platform, including the T-14 tank, the T-15 heavy infantry combat vehicle, and the Koalitsiya-SV 152-mm self-propelled artillery gun.

© Sputnik / Russian Defence Ministry
Game Changer: Russia’s Actions Drastically Changed Situation in Syria
On September 30, at the official request of the Syrian authorities, the Russian Aerospace Forces launched a military offensive in Syria. The Russian task force unit was deployed to the Hmeymim airbase, outside Latakia. To deliver material supplies to the base, Russia used ships of the Black Sea Fleet. In addition, Russia bought eight cargo ships from Turkey.

On the morning of October 7, warships of the Caspian Flotilla fired 26 Kalibr cruise missiles against Daesh (Islamic State) targets. This was the first combat use of cruise missiles in the history of the Russian military. On October 20, a memorandum was signed between the Russian Armed Forces and the Pentagon to avoid collisions in the airspace over Syria.

On October 31, a Russian Airbus A321 passenger aircraft crashed in the Sinai Peninsula. All the 224 people on board were killed. President Vladimir Putin pledged to "find and punish" those behind the catastrophe. On November 17, Russian Tu-22M3, Tu-160 and Tu-95 long-range bombers carried out a massive strike against Daesh production facilities. A total of 34 Kh-101 cruise missiles were engaged.

© Photo : Russian Defence Ministry
Bombs mounted on a Russian jet at the Hmeymim airbase in Syria

On November 18, Tu-160, Tu-95MS and Tu-22M3 bombers carried out airstrikes against 206 Daesh targets. The Russian General Staff reinforced the task force in Syria, up to 69 aircraft. In addition, the aerial unit was supported by four ships of the Caspian Flotilla and six ships of the Russian Navy deployed to the Mediterranean. On November 20, the Caspian Flotilla fired 18 cruise missile against Daesh targets.

A total of 1,400 tons of various bombs and 101 cruise missiles were used against terrorists during the operation.

On December 7, the first combat launch of cruise missiles was performed from the Rostov-on-Don submarine of the Russian Navy.

Start of the Su-35 Deliveries to the Chinese Air Force

This year marked a new stage in military and technical cooperation between Russia and China. A bilateral agreement to deliver 24 Su-35 4++-generation multirole fighters was inked. The negotiations have been underway since 2008. The contract is estimated at nearly $2 billion, $83 million for each jet.

China became the first buyer of these cutting-edge war machines. According to the contract, the jets are equipped with Chinese-made avionics, but will not be manufactured in China.

Russian and China have been building up their military cooperation. Before the Su-35 contract, Russia delivered to China Su-27 fighters, S-400 and S-300 air defenses, Buk anti-aircraft missiles, and Lada-class diesel-powered submarines.

The center serves as the centerpiece for operative management of the Russian Air Force, Air Defense Forces and the Missile Defense. Their tasks include protecting the Russian airspace, managing missile launches as well as securing the Russian satellite group.

By August 1, the command and headquarters of the Aerospace Forces were established. The new branch comprised the Air Force, the Space Force and the Air Defense Forces.

Military analysts underscored that the Aerospace Forces were established at a time when the Pentagon relies on the new conception of an immediate global strike and mulls deploying attack systems to the near space.

In January 2014, the preparation for establishing a new military formation based on the Northern Fleet was completed. The Sever (North) strategic command was formed to protect Russia’s interests in the Arctic Region.

It comprised forces of the Northern Fleet as well as units of the Aerospace Forces and the Army.