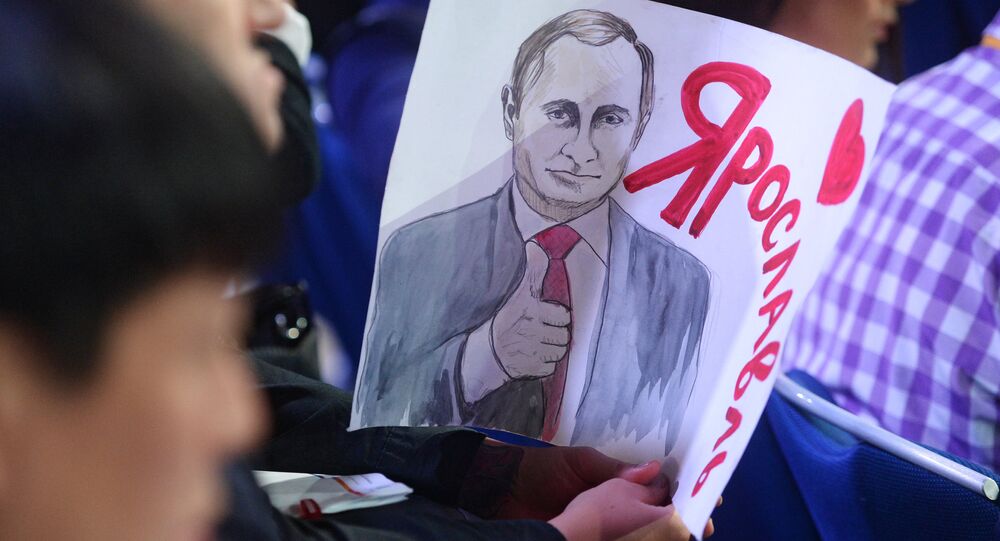 From the war against Daesh to the economy, pensions, sports, and everything in between, there were plenty of serious moments during President Vladimir Putin's 3 hour + press conference. But enough serious business. Sputnik looks back at the annual presser event's more light-hearted moments, as commented on by Twitter.

To begin, even before the press conference started, many commentators, most of them journalists, noticed a rather odd phenomenon — that they themselves were inadvertently (or advertently) 'becoming a part of the story', taking pictures of each other, and commenting on one another's clothes, accessories and behavior.

She wants to get Putin's attention thanks to this doll. Let's wish her luck. #PutinPresser #oF24 pic.twitter.com/gEogH1W5qp

Journalist Yevgeny is from Khanty-Mansisk. He's brought a drum with him to attract Putin's attention #putinpresser pic.twitter.com/TOdZI9PvNS

​Sign reads: 'For Prohibition' Comment: "Kick this man out of there. He is an enemy of the state!"

I get the feeling the media's becoming part of the story. Lots of journalists taking pictures of other journalists. #Putinpresser

With over 1,400 journalists present at the event, their creative efforts to get noticed shouldn't really be surprising to anyone.

This is how you have to try to get a question. One of these signs says "I'm pregnant". Really. pic.twitter.com/BglhK5xkOF

Putin broke the ice at the event by telling journalists an old joke – one which got lost in translation; it turns out that the joke was actually more like a light-hearted parable about peoples' tendency not to realize it when times are good.

#PutinPresser 'Let us begin by me telling you an old joke' FOLLOW LIVE https://t.co/6qzuta8CLx https://t.co/5NSspLzzjO

Some of the president's more serious answers also got a laugh, among them the suggestion that embattled former FIFA President Sepp Blatter should be given the Nobel Peace Prize.

Vladimir Putin has just said that Sepp Blatter should be given the Nobel Peace Prize. pic.twitter.com/UinvxZHuCv

Some users also found hilarious the president's suggestion that the divisive businessman and Republican presidential frontrunner Donald Trump was "a very bright and talented person," with some going so far as to declare that Putin had 'endorsed' Trump.

The president's choice of words about a third party being involved in Turkey's downing of the Russian Su-24 last month also became an instant hit, getting a laugh and applause, and instantly becoming a meme on the Russian twitterverse.

#Putin: Did someone in #Turkey's gov't want to 'lick US in certain spot'? https://t.co/khVMfaYXPj #Su24 pic.twitter.com/GKhbJqPmti

"I don't know if somebody in the Turkish government decided to lick Americans' particular place." Applause. #PutinPresser

"The moment when the president calls it like it is."

Left panel: "If someone in Turkey decided to lick the Americans in a particular place, I don't know if the Americans need this." Right panel: "Hello, Barack? WTF man? We agreed that no one would find out about this!"

As is often the case at such events, another funny moment ended up being a female journalist's complement on the president's appearance and ability to keep in shape.

OMG. "Vladimir Vladimirovich, as a woman I can't help comment that you look so well and sporty, and you are an example for all our boys"

All in all, some commentators were disappointed by the event's sticking to serious business, suggesting that it was not as fun as last year's press conference, which featured allegories about stuffed bears, marriage proposals and jokes about soft drinks.

I don't know about you but that wasn't one of #Putin's more thrilling press conferences. Over in less than 3hrs 10 mins. #PutinPresser

That was the shortest, and dullest, Putin presser I've seen. No stuffed animals! No quasi-marriage proposals! No questions about kvas!

Well guys, life can't just be all fun and games now can it?