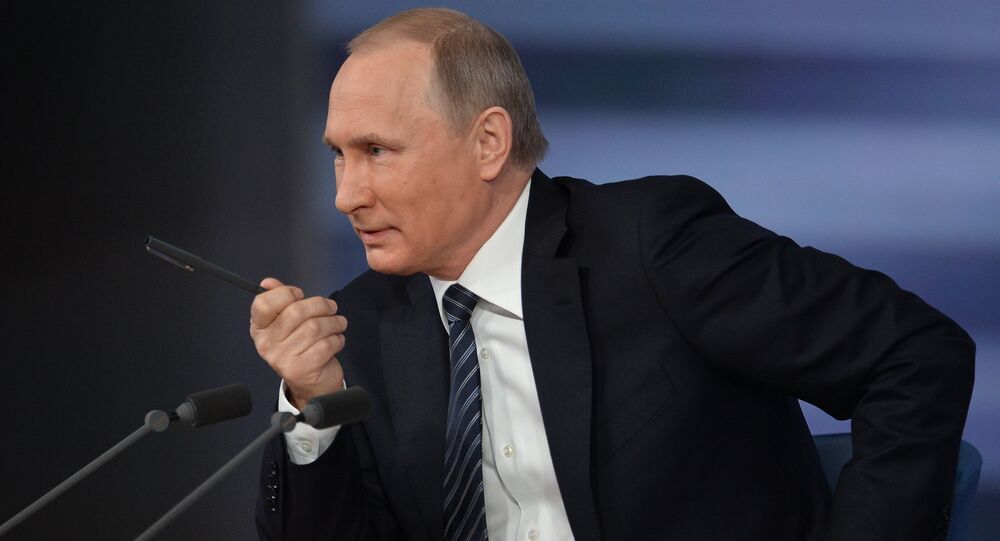 Who Makes the President Proud? Putin’s Top Answers at His Annual Q&A

Every year President Putin holds his year-end Q&A session, where both Russian and foreign reporters get to address the country’s major problems and achievements directly with the head of state. And every year journalists try to sneak in some personal questions. This year was no exception. Here is a selection of some of the president’s top answers.

This time the president started straight away with the questions, skipping his usual opening address where he touches upon what he deems most important. As he rightfully noted, he has had so many public appearances this year that he “does not know what else to add” to his previous statements.

“I believe I covered all the key points. Nevertheless, there must be issues which you want us to clarify. When I say ‘us’, I am referring to my colleagues in the Presidential Executive Office and the Government Cabinet and myself.”

“Therefore, I suggest that we skip any lengthy monologues and get right down to your questions so as not to waste time.”

After this particular phrase the Russian leader took off his watch and put it nearby. Many then wondered if he was keeping half an eye on the time?

​The event, his 11th media news conference, was attended by a record number of journalists — 1390, most of whom were Russian. There were therefore many questions on the internal economic situation, low energy prices, fall in value of the Russian ruble and further hardships.

Among the issues of particular interest to the foreign reporters were Russia’s relationship with Turkey, Ukraine and Georgia, its air campaign in Syria, the downing of Russia’s Su-24 bomber and the fate of Syrian President Assad.

On the downing of Russia’s Su-24

The president said that the incident with the downing of the Russian bomber is not just an unfriendly act but a hostile one. Moreover, Turkey ran to complain to NATO instead of settling it with Moscow. Had it been an accident they could have apologized.

“They [Turkish authorities] thought that we would turn tail and run! No, Russia is not that country! We have increased our presence in Syria, have increased the number of combat aircraft deployed there. There was no Russian air defense system there – now there is S-400. If, before, Turkey had constantly violated Syrian airspace, let them try now.”

#Putin: Did someone in #Turkey's gov't want to 'lick US in certain spot'? https://t.co/khVMfaYXPj #Su24 pic.twitter.com/GKhbJqPmti

On the Russian air campaign in Syria

The president made assurances that Russia will stay in Syria while the Syrian army keeps fighting terrorists. However, he added:

“As soon as we notice the political process has begun, and the Syrian government decides it is time to stop the airstrikes, [we are going to stop]. We are not going to be more Syrian than the Syrians themselves. We don’t need this, do we? The sooner it [the process] starts, the better.”

On the relationship with Georgia and its ex-president Saakashvili

The president reiterated it was not Russia who initiated the deterioration of the relations with Georgia but solely and completely the Georgian authorities. But, he stressed, Russia is ready to restore those relations. And is ready to abolish the visa regime with Georgia.

However the Russian leader commented on the appointment of Georgian fugitive ex-president Mikheil Saakashvili as the governor of the Odessa region.

“In my view, this is spitting in the face of the Ukrainian people. Besides just putting Ukraine under external rule, they have delegated power to such characters there.”

“Saakashvili was denied a working visa into the US. So, they sent him to Ukraine – let him command there. So there he is, actively functioning there.”

The president also noted that the Ukrainian authorities have been earlier told that they would not only be under external control, but they would be sent people from “more civilized countries” to manage key positions in the country.

“Out of 45 million people, was it that difficult to find 5-10 honest decent managers?” he wondered.

But, as usual, the most interesting were the answers about the president’s private life.

After having commented on doping and corruption in sports, the president was complimented by one of the female journalists on his great shape and healthy appearance.

OMG. "Vladimir Vladimirovich, as a woman I can't help comment that you look so well and sporty, and you are an example for all our boys"

​Putin laughed and quipped that “all his achievements are doping-free.”

© Sputnik / Michael Klimentyev
Proud Putin Tells Press His Daughters Live and Work Right Home in Russia
The Russian leader seldom comments about his private life and almost never – about his children. This time however he broke his rule and shed some light on his daughters.

"I've seen different reports about my daughters — the media were saying they are getting an education abroad and are living abroad. Now, thank God, this isn't the case. It's true: my daughters are living in Russia; they do not have any other permanent residence. They've only been studying at Russian universities."

"My daughters have never lived in the limelight. They speak three European languages fluently, they can also speak one or two oriental languages. I am proud of them. They are living their lives and are doing it decently.”