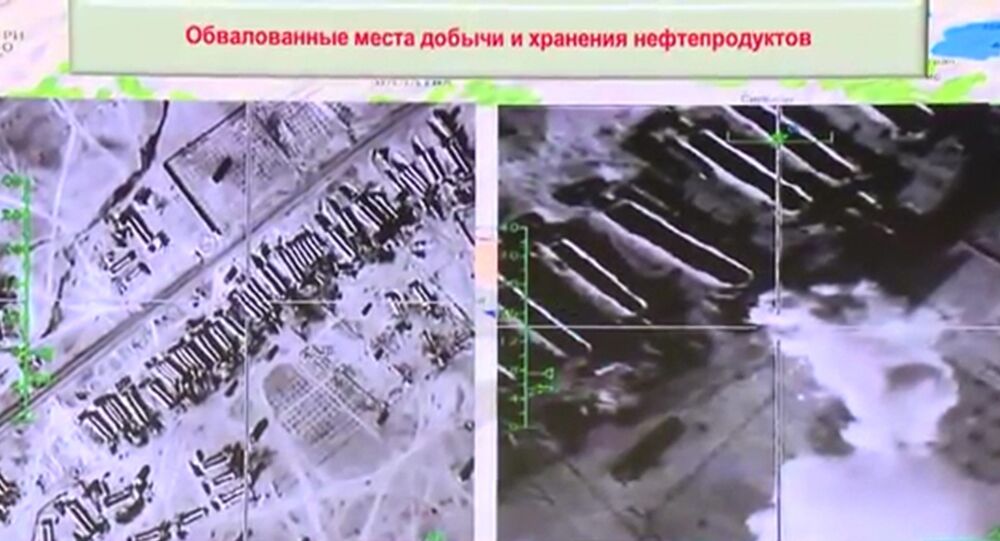 The Russian Defense Ministry during the briefing in Moscow on Wednesday has provided satellite images that show Daesh illegal oil smuggling through the Turkish-Syrian border. The ministry has also presented data on the infrastructure of the illegal oil trade.

MOSCOW (Sputnik) – Turkish President Recep Tayyip Erdogan and his family are involved in the illegal deliveries of oil from the Islamic State, known in the Arab world as Daesh and whose activities are prohibited in Russia, Russian Deputy Defense Minister Anatoly Antonov said Wednesday.

“Revenues from the sale of oil are one of the most important sources of activity by terrorists in Syria. They earn around $2 billion annually, spending these funds on hiring militants from around the world and equipping them with weapons, equipment, and arms,” Antonov said during a briefing in Moscow.

He said the main consumer of the illegal oil deliveries from Syria and Iraq is Turkey.

During the brifing, the ministry has provided space surveillance photographs demonstrating that Daesh currently transports up to 200,000 barrels of oil for processing to third-party countries including Turkey.

But Turkish President Recep Tayyip Erdogan will not admit to profiting from oil deals with terrorists even if his face is “smeared with smuggled oil,” Russian Deputy Defense Minister Anatoly Antonov said Wednesday.

“None of Turkey’s top leaders, nor Mr Erdogan in particular, will resign or admit anything, even if their faces were smeared in stolen oil,” Antonov said at a briefing.

© REUTERS / Christian Hartmann
Are You Sure About That? Why Erdogan Shouldn't Have Asked for Proof
Antonov was reiterating earlier remarks made by Russian President Vladimir Putin about evidence that suggests Erdogan and his family continue to profit from oil deals made with the Islamic State jihadist group (IS or Daesh in Arabic), an organization outlawed in Russia.

He cited the recent case of two Turkish opposition newspaper editors being charged for “divulging state secrets” as proof of the culture of impunity he claims is pervasive in Turkey’s top political structures.

“We know the price of Erdogan’s words. Turkish journalists caught him lying, revealing Turkey’s delivery of weapons to militants disguised as humanitarian aid. These journalists were imprisoned,” Antonov stressed. “The cynicism of Turkish leadership is limitless.”

The deputy minister clarified that Russia was not seeking Erdogans’ resignation, but instead sought to demonstrate that terrorist oil was being smuggled into Turkey and ultimately cut off the oil supply lines.

“It is up to the people of Turkey to decide. Our purpose is fighting terrorism. Our objective is to shut down the sources of financing of terrorism,” Antonov emphasized.

The number of oil tanker trucks from the Islamic State, known in the Arab world as Daesh and whose activities are banned in Russia, has considerably decreased since the beginning of Russian Aerospace Forces airstrikes, the head of the Russian General Staff’s operative command said Wednesday.

"At least 1,722 fuel trucks along roadside parking areas have been discovered using equipment from the [Russian] space reconnaissance. It should be noted that since the beginning of airstrikes by Russian airplanes against facilities of the oil infrastructure in the hands of ISIL, the number of fuel trucks at parking areas has considerably decreased," Sergei Rudskoy said during a briefing.

© AP Photo / SANA
'The Facts Are Telling': Assad Says US-Led Airstrikes Lead to Daesh Support
Rudskoy said conservative estimates showed that Daesh has sustained up to $1.5 million of damage per day in their illegal business due to Russian airstrikes. Russia has been carrying out an air campaign in the Arab republic at the request of the Syrian leadership since September 30.

But Russia is not seeing any attacks by the US-led coalition on the Islamic State oil convoys, the head of the Russian General Staff’s operative command said Wednesday.

"It's hard not to notice them. However, no airstrikes by the coalition are noted against the oil convoys," Lt. Gen. Sergei Rudskoy told reporters.

He added that oil from ISIL-controlled areas in Syria was shipped to refineries in third countries after being transported to Turkey.

"Space reconnaissance has reliably shown that after crossing the border, tank trucks carrying oil head to the ports of Dortyol and Iskenderun," Rudskoy pointed out.