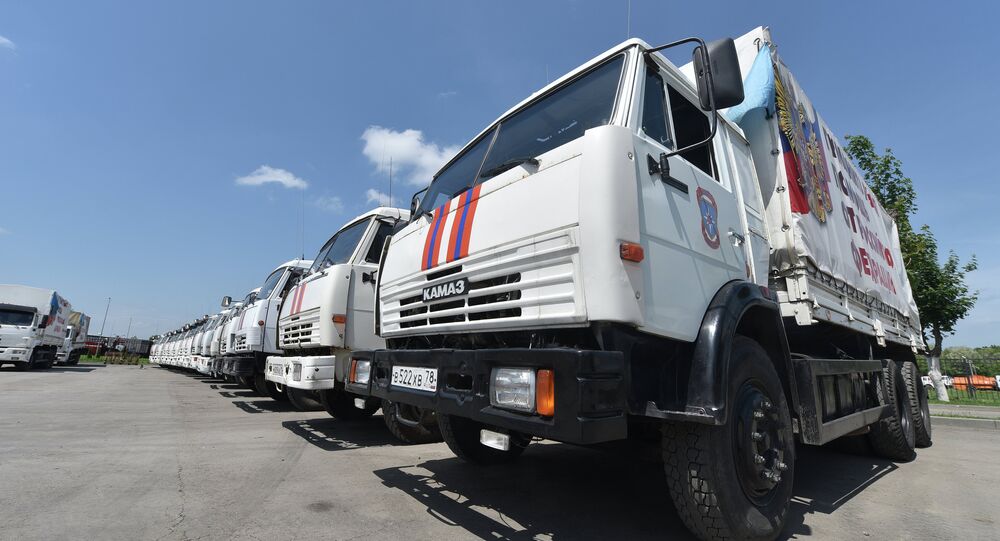 The 46th humanitarian aid convoy that the Russian Emergencies Ministry has prepared for residents of Ukraine’s crisis-hit southeastern regions (Donbass) has departed for Donetsk and Lugansk, a ministry representative told journalists.

MOSCOW (Sputnik) – The convoy consists of over 100 vehicles that are carrying over 1,000 tonnes (metric tons) of humanitarian cargo, mostly food and medicine, to Donbass.

"At 04:00 Moscow time [01:00 GMT], over 100 vehicles left the Donskoy rescue center of the Emergencies Ministry in the [Russian] Rostov region in the direction of the Russia-Ukraine border," the spokesperson said on Thursday morning.

The aid will be evenly distributed between Ukraine's southeastern Donetsk and Lugansk regions, which have been severely affected by Kiev’s special military operation, launched in Donbass in April 2014. The operation was a response to local residents' refusal to recognize the new coup-installed government in the country.

Donbass residents have also been affected by an economic blockade, imposed by Ukrainian President Petro Poroshenko in November 2014.

Overall, Russia has delivered more than 54,500 tonnes of humanitarian aid to Donbass since August 2014.