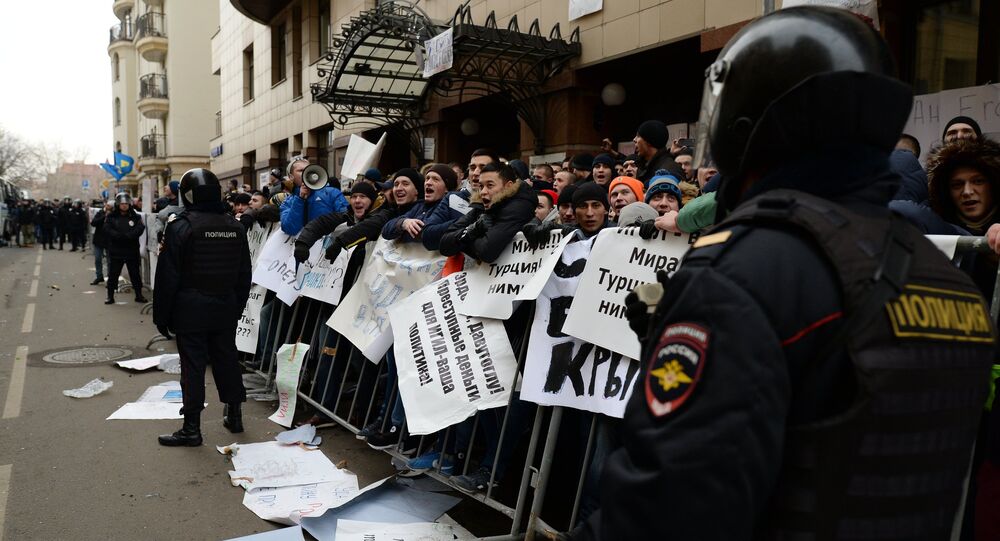 Several hundred people assembled on Wednesday in front of the Turkish Embassy in Moscow to protest Ankara's downing of a Russian warplane, a RIA Novosti correspondent reported.

According to the organizers, the rally involves about 500 people.

© AFP 2020 / BULENT KILIC
Foul Play: Turkey May Have 'Always Been Supporting ISIL'
Traffic near the embassy is stopped, as the space near the building and the opposite side of the street is crowded with protesters. Protesters have pelted the embassy with brilliant green antiseptic, eggs, tomatoes and stones, and smashed several windows on the second floor, a corespondent reported from the site.

The police have called on protesters to calm down. No protester has been detained, and law enforcement has been deployed near the embassy.

Some cars passing through the streets are honking in support of the protesters.

On Tuesday, a Russian Sukhoi Su-24 jet crashed in Syria. Russian President Vladimir Putin said that the plane was downed by an air-to-air missile launched by a Turkish F-16 jet over Syrian territory, falling 4 kilometers (2.5 miles) from the Turkish border. Ankara claimed it downed the Russian plane because it violated Turkish airspace. Moscow has firmly denied the accusations.