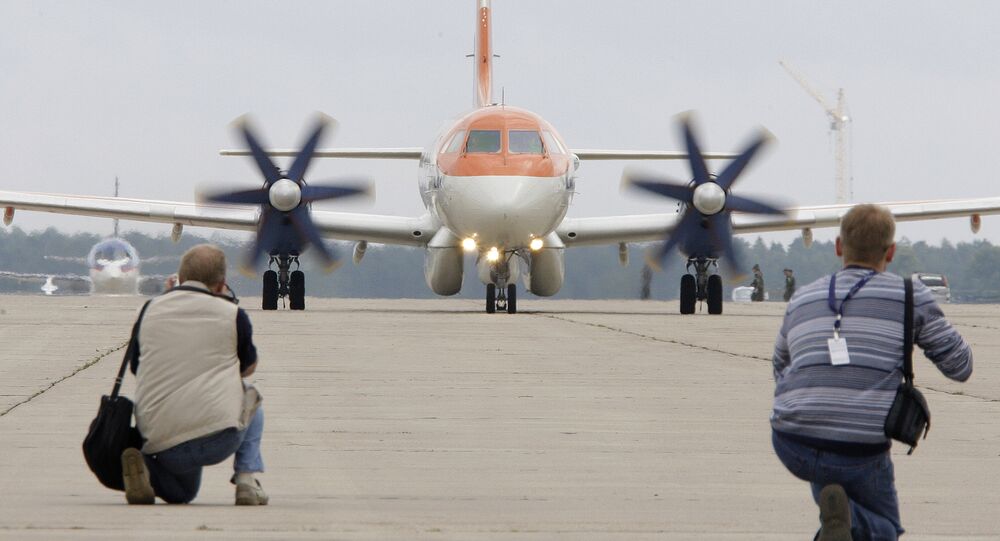 Back to the Future: Russia Ready to Reenter the Passenger Plane Big Leagues

A quarter-century after the collapse of the Soviet Union, an event which resulted in the near-destruction of the country's once-proud civil aviation industry, Russia is looking to resurrect its production of civilian aircraft, from the Sukhoi Superjet 100 to the Ilyushin Il-114, German newspaper Handelsblatt reports.

The newspaper notes that while the long-haul civil aviation market remains dominated, for the moment, by the big players, Airbus and Boeing, the mid-size, medium-range market, "i.e. that consisting of aircraft with a capacity of up to 130 passengers and a range up to 3,000 km," is heating up, "with Canada's Bombardier, Brazil's Emraer and French-Italian concern ATR firmly establishing themselves."

"And suddenly," Handelsblatt notes, more contenders are "looking to join the game. This week the Japanese regional aircraft Mitsubishi Regional Jet made its first flight.  Now Russia too, famous during the Soviet era for its Ilyushin, Tupolev and Yak aircraft, is looking to break into the market."

The paper notes that modest progress has already been made with the Sukhoi Superjet 100, with  over 200 orders placed, 50 of them with Aeroflot. Sukhoi has already delivered 21 of the aircraft to Russia's flag carrier airline, even if Airbus and Boeing (with about 125 and 25 aircraft, respectively) still outnumber them percentage-wise in Aeroflot's fleet. Incidentally, what the paper doesn't mention is that the airline also has plans to purchase 50 Irkut MS-21 mid-range mid-size airliners, while orders for Airbus and Boeing amount to a combined 29.

"Now," Handelsblatt notes, "Russia has decided to resurrect an old project –the production of a regional aircraft created by the Ilyushin Design Bureau: The Il-114 is to be produced once again."

The decision was announced last month by Ilyushin Chief Designer Nikolai Talikov, who explained that the aircraft would begin production at the Sokol Aircraft Building Plant in Nizhny Novgorod, appearing as early as 2018, if an agreement can be made to begin construction on the basis of plans received from Uzbekistan's Tashkent Aircraft Building Plant, with fully localized production, complete with Russian engines, to begin in late 2019 or 2020.

The newspaper recalls that "when the plane made its first experimental flight in March 1990, the Soviet Union was on the brink of collapse. There were not enough resources even for the development of the air force, much less civil aviation. The lack of funding led to delays. The aircraft was certified only in 1997, and from that time on only 18 aircraft were built in Uzbekistan, which at the time was dependent on Moscow. In 2012, production in Tashkent was stopped."

© Sputnik / Vladimir Astapkovich
An Ilyushin 114 at the final rehearsal ahead of the opening of the MAKS 2015 International Aviation and Space Salon in Zhukovsky, outside Moscow.

Then, last week, "an unexpected turn occurred," with Deputy Prime Minister Dmitri Rogozin announcing on his Twitter account that the "guidelines for the development of the short-haul aircraft on the basis of the Il-114 have been given, with production to be set up in Nizhny Novgorod."

"Hymns of praise can already be heard on Russian state television," the German newspaper sarcastically noted, with experts explaining that the cost of the aircraft –equivalent to between $16-17 million US, will be "significantly lower than its competitors –the ATR-72 ($25 million) and the Bombardier Dash 8 ($35 million). And servicing the Russian aircraft, designed for 64 passengers, will be cheaper – 590 kg worth of fuel per hour of flight time, instead of the 800 kg required for the ATR and 2600 kg for the Dash 8. And the Russian plane's aerodynamics are very good, even if its calculations are not quite fair; after all, the ATR-72 and the Dash 8 can accommodate more passengers" (74 and 78, respectively).

But this, according Handelsblatt, "should not detract from the Ilyushin's merits. A significant portion of the brand's advantage stems from its nickname –the 'countryside plane', coming from the fact that it can land safely on virtually any hard surface. In other words, it is a plane suitable for provincial airports and airfields, where there are not enough funds for the modernization of the runway."

"Nevertheless," the paper notes, "the plane needs funding [for its modernization]. The plane's design meets all modern requirements, but the engines must be altered. According to preliminary estimates by the state-owned United Aircraft Company, the total cost of developing and producing the aircraft will run an estimated 500 million euros."

© RIA Novosti . Alexander Kryazhev
Russian Aviation Industry Fighting Back Against Foreign Invasion
According to UAC President Yuri Slusar, the resurrection of the Il-114 "will give us the ability to maintain our competency in the field of turboprop aircraft. We are grateful to the federal government and to the administration of the Nizhny Novgorod region for the forthcoming assistance in the organization of production, a favorable investment climate and tax regime, and the introduction of social support programs."

Handelsblatt notes that "in connection with the development of an ideological conflict between Russia and the West, the Kremlin is not skimping on such projects. The motto is import substitution, and the building of one's own aircraft, which will reduce dependence on Airbus and Boeing, fits into this concept perfectly."

The newspaper warns that serial production of the updated Il-114 could be delayed, even if the plane has the capacity to be used by the military, and for achieving the country's strategic objectives in the Artic. Handelsblatt skeptically suggests that "the plane is too small for the country's big ambitions, and for its vast territory."

Along with the Sukhoi Superjet and the Il-114, the MS-21 (mid-range, 150-212 passenger) aircraft is set for certification trials beginning next year, with delivery expected to begin in two to three years, including Russian made engines beginning in 2018.