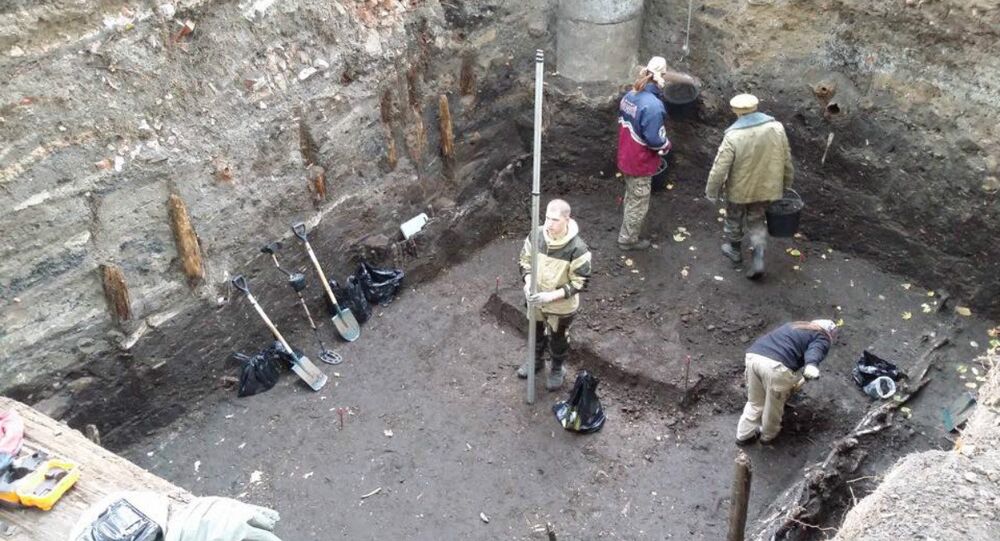 The Russian Academy of Sciences carried out archaeological excavation in the historical center of Moscow which found hundreds of items of historical interest, in particular a medieval manuscript written on birch bark.

© Sputnik / Vladimir Astapkovich
Moscow Trolleybuses Turn Out for 82nd Birthday Parade and Exhibition
An archaeological dig to find out more about medieval life in Moscow has turned up hundreds of items of historical interest, including a letter from the Middle Ages written on birch bark that reveals much about life in the city at that time.

"A particularly notable, extremely rare and important find for Moscow is a letter, written on paper made from birch bark, that is, a birch bark manuscript. It is bound to give us a lot of new information about life in Moscow in the Middle Ages," said Leonid Belyaev, head of the archaeology department at the Russian Academy of Sciences, who is leading the excavation project.

The letter, which is addressed to 'Gospodine' [Sir], talks about an unnamed individual's unsuccessful trip to a place called 'Kostrom.' The author gives the sorry details of the journey; the people who tried to make the trip were detained by someone, who had the right to do so, apparently an official of the Middle Ages.

This person firstly took from the unlucky traveler 13 'bela,' and then another three bela. The bela was a kind of smaller monetary unit used in medieval Russia, which replaced the 'nogata,' another smaller unit.

Then, it seems, the official decided that 16 bela was still not enough, and demanded another 20 bela, as well as a 'poltina,' a large sum of 50 kopecks.

© Photo : Institute of archeology RAS
The rare 14th century birch bark manuscript discovered in Moscow
"This manuscript is the fourth to be discovered [in Moscow]. But in a sense it is the first real manuscript which meets the criteria for the 'Novgorod Standard' – that is, a private letter written, letter for letter, according to the literary penmanship of the 14th century, on a specially prepared strip of bark," said Belyaev.

The first birch bark manuscripts of medieval Russia, documents which were scratched by the author onto a strip of birch bark, were discovered during archeological excavations in Velikiy Novgorod in the 1950s.

© Photo : dvfu.ru
Archaeologists Discover Ancient Settlement in Russia’s Far East
More than 1000 such manuscripts have been found in Velikiy Novgorod, pointing to an unusually high degree of literacy among medieval inhabitants there. Excavations in Moscow and other Russian cities have unearthed less than 100 of the texts in total.

The recent excavation took place in Zaryadye, a historical district close to Red Square, where the archaeologists found the remains of 14th century life by digging just four meters down. Among other artefacts discovered were a tombstone fragment carved from limestone, and a ceramic bowl fragment from the Zolotaya Orda, or Golden Horde, a medieval Eurasian kingdom.

Lighting Up the Town: Moscow to Use Neon Lights to Mark UN's 70th Birthday