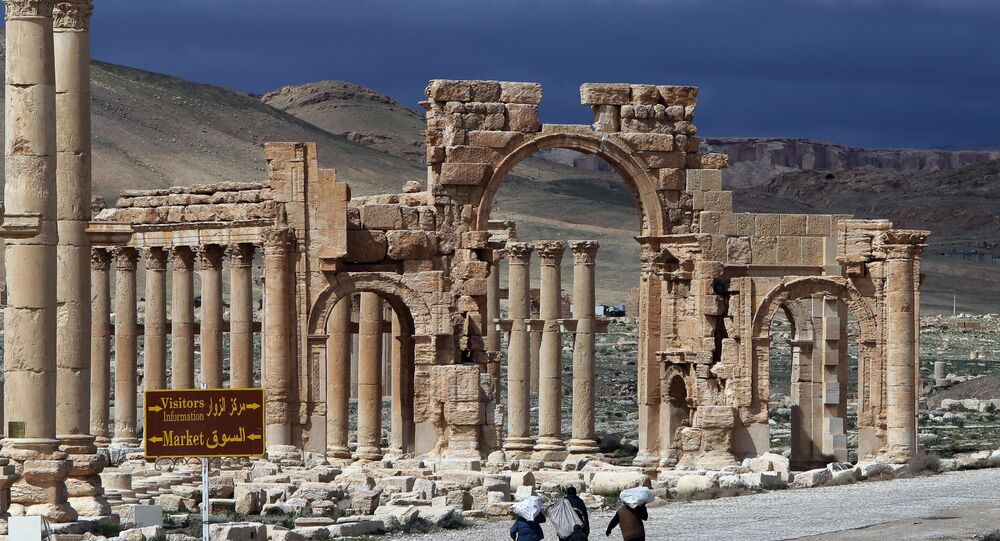 Why is the Ancient Syrian Palmyra so Important for Millions of Russians?

The destruction of the 2,000-year-old Roman Triumphant Arch in Palmyra by Islamic State insurgents has triggered a wave of deep sorrow in Russia and stirred a heated debate among Russian Facebook users.

© Flickr
ISIL Militants Blow Up Roman-Era Arch of Triumph in Palmyra
Syria's Palmyra — the magnificent ruins of a great city, once one of the most important cultural centers of the ancient world — is especially close to hearts of millions of Russians it turns out.

On October 5, 2015 media outlets reported that the 2,000 year-old Roman Arch of Triumph in the ancient city of Palmyra was blown up by ISIL militants.

Located in the Syrian desert, north east of Damascus, Palmyra has always been considered a magnificent and unique historical site which stood at the crossroads of several civilizations. The architecture of the once great city contained elements of Greek, Roman and Persian styles.

The United Nations Educational, Scientific and Cultural Organization (UNESCO) deplored the destruction of the famous Arch of Triumph by ISIL terrorists.

"Palmyra symbolizes everything that extremists abhor; cultural diversity, intercultural dialogue, the encounter of different peoples in this center of trading between Europe and Asia," Director-General of the UNESCO Irina Bokova said as quoted by the organization's official site.

One of the posts dedicated to the issue was shared on Facebook and immediately went viral. For instance, Facebook user Galyna Gavrylenko received thousands of likes and shares when she attached a photo of the cover of an old Russian history school book for 5th graders depicting the famous Palmyra Arch of Triumph.

"Those who studied history using this textbook raise your hands," Galyna wrote, adding that the news of Palmyra's destruction has obviously left many in Russia with a heavy heart.

© AFP 2020 / JOSEPH EID
ISIL Rigs Palmyra's Ancient Roman Amphitheater With Explosives
Palmyra had long attracted the attention of Russian historians. In 1881-1882 Russian researcher Semyon Abamelek-Lazarev went on an expedition to the Syrian desert. He found an extraordinary historical document, a list of ancient customs rules, which shed light on the history of ancient trade and peaceful coexistence of Western and Eastern cultures in Palmyra.

According to UNESCO, the Arch of Triumph was erected by Septimius Severus between 193 and 211 AD. It was located between the Great Colonnade and the Temple of Bel, which was also destroyed this year by Islamic State jihadists.