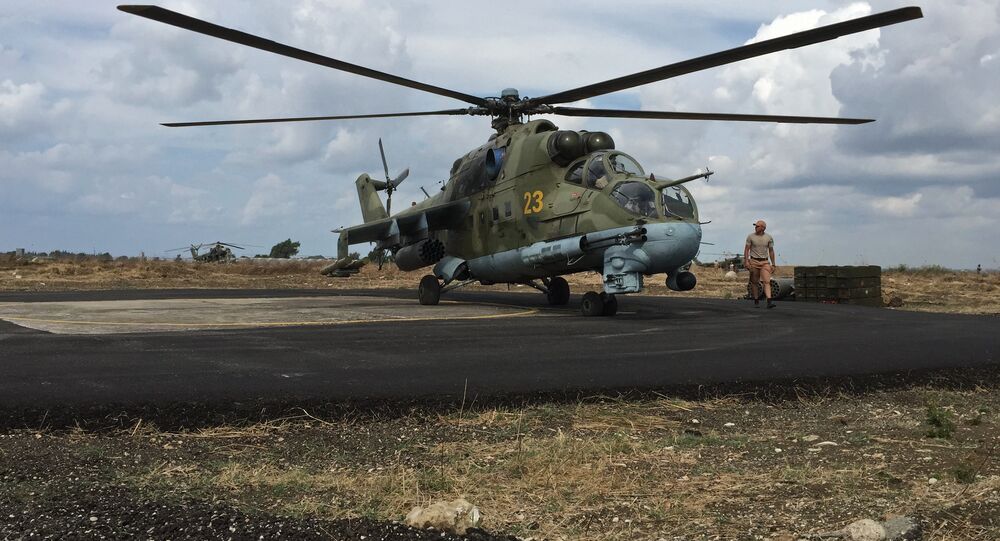 Russia has deployed Mi-24 helicopter gunships to Syria as part of its operation against ISIL targets.

Russia has deployed its notorious Mi-24 helicopter gunships to Syria, where they are part of the operation against Islamic State terrorist targets.

Mi-24 "Hind" patrols #ruaf base in #syria. Managed to snap it in slow-mo! pic.twitter.com/H6qG9QES41

According to Colonel Igor Klimov of the Russian Air Force in Hmeymim Air Base in Syria, the Mi-24 helicopters are currently being used for patrolling the area around the airfield and for potential search and rescue missions. The Mi-24 is considered to be one of most deadly and versatile helicopters in the world.

"The Mi-24 accelerates up to 300 kilometers per hour and rises to an altitude of up to 4.5 kilometers," Klimov told RIA Novosti.

Each Russian Mi-24 helicopter in Syria is also armed with four blocks of 20 unguided air-to ground rockets and a 30-millimeter cannon.

Mi-24s usually patrol around the #ruaf airbase in pairs. They fly VERY low, pilots tell me — 10 to 50 meters pic.twitter.com/ZrWF29D88l

© Sputnik / Dmitriy Vinogradov
The Russian Air Force Fighting Terrorism in Syria
12
The helicopters are said to currently be patrolling the area of the Hmeymim air base where Russia's air force is stationed, although their use could be expanded.

In addition to the Mi-24 helicopters, Russia has deployed Mi-8AMTSh "Terminator" transport and combat helicopters to Syria.