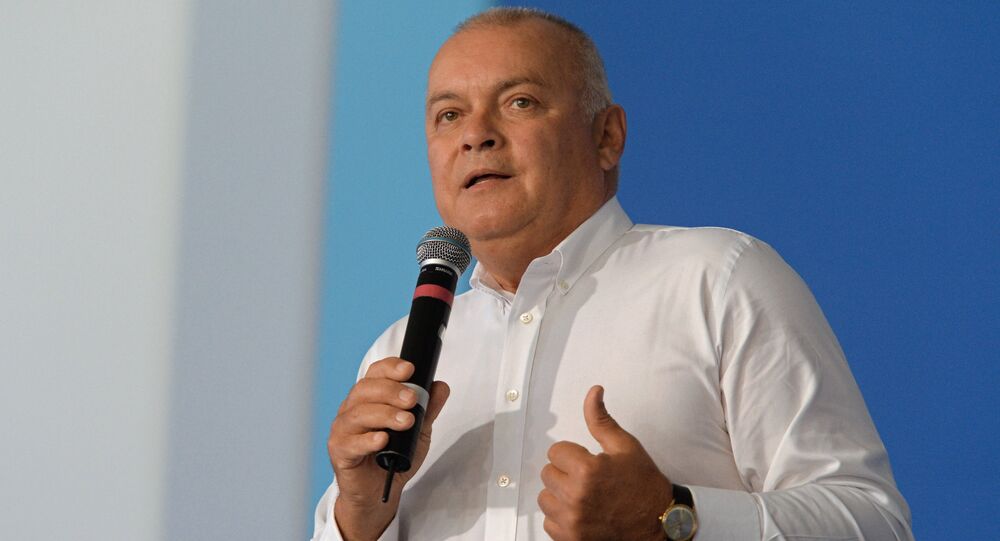 Journalism must act as a platform in which Russian economic development is discussed, Rossiya Segodnya International Information Agency's Director General Dmitry Kiselev, also co-chairman of the Media Council of the Russian-Chinese committee of Friendship, Peace and Development, said.

© Sputnik / Ramil Sitdikov
Rossiya Segodnya Urges OSCE to Oppose Journalists Discrimination in Ukraine
MOSCOW (Sputnik) – Rossiya Segodnya International Information Agency's Director General Dmitry Kiselev made the statement at a meeting with the representatives of the delegation of the All-China Journalists Association, comprising Liu Xiaoqing, the deputy chief editor of the China News Service, Jiang Zuxuan, the chief editor of the Hunan Daily newspaper, Ding Zhonghao, the chief editor of the Liaoning Daily newspaper and Shang Long, the deputy director of the information administration of the State Council of the People's Republic of China.

According to Russia’s Economic Development Ministry, Russia’s GDP dropped 3.8 percent in the January-August period. China’s economic growth stood at 7 percent at the end of the second quarter of 2015.

"Recently, in my Sunday analytical program I said that the key to Russia’s economic development had not been found. If it were found, Russia would be growing at the same rate as China, so it is important that journalism become the platform where various options for Russia’s economic growth are discussed. This platform is important for state-wide, nation-wide reflection, for brainstorming on this issue," Kiselev said.

Kiselev introduced to the Chinese delegation the primary tasks, practices and achievements of the Rossiya Segodnya International Information Agency, as well as the work of agency journalists under increasing pressure of western media reporting about Russia. The Sputnik China resource, launched in December 2014, was presented to the Chinese delegation during the meeting. Sputnik China comprises websites, radio, mobile apps and social media pages. The Sputnik China news wire publishes over 120 news materials daily.

Kiselev stressed the importance of qualified journalism in answering a question from his Chinese colleagues as to how Russian media managed to break free of the information blockade under the conditions of western sanctions.

"Qualified journalism is essential to exploring the issue from different points of view. If the reader, listener or the television viewer understands that the journalist had worked on this, knows the issue profoundly, then he trusts him. We believe that the interpretation based on profound knowledge wins," Rossiya Segodnya’s chief said.

"On one hand, there are western values, American values, the desire to dominate the world. On the other hand, there is the position of China and Russia, who accept different systems of values, where China must remain Chinese, Turkey [remains] Turkish, Japan [remains] Japanese, and Russia stays the way it is now. We are advocating a colorful, multistructure world," he added.

Kiselev believes that the demand for alternative viewpoints rose from a consistent, one-sided US position.

"China, for example, doesn’t say that Chinese values are better than America. China says that the Chinese values have the right to exist. China, like Russia, isn’t fighting other values. The Americans, after September 11 [2001] decided to act out on the ‘we are bound to lead’ principle. US President Barack Obama states that America is a unique country. At the UN General Assembly he reiterated that the United States has a right to use force unilaterally, but it isn’t clear who gave them the right to do so. They want to build their world according to their model. This is exactly why the demand for an alternative point of view has emerged," Kiselev said.

The expression of this alternative view point by Russia and China did not allow the United States to bomb Syria, as it did earlier with Iraq, Kiselev observed. He spoke about the work of the Russian-Chinese committee of Friendship, Peace and Development, chaired by Boris Titov on the Russian side and Dai Bingguo on the Chinese side.

Liu Xiaoqing expressed hope for deepening relations between Russian and Chinese media. The chief editor of China News Service said that the delegation has held talks in the Russian Journalist Union during this visit, and is planning to attend the Sochi media forum.

"The next year was announced to be the year of Russian and Chinese media, so I hope that the cooperation between us will only develop and strengthen," Liu said.

Russian President Vladimir Putin and Chinese leader Xi Jinping in May agreed to conduct cross-years of the Chinese and Russian media in 2016 and 2017.