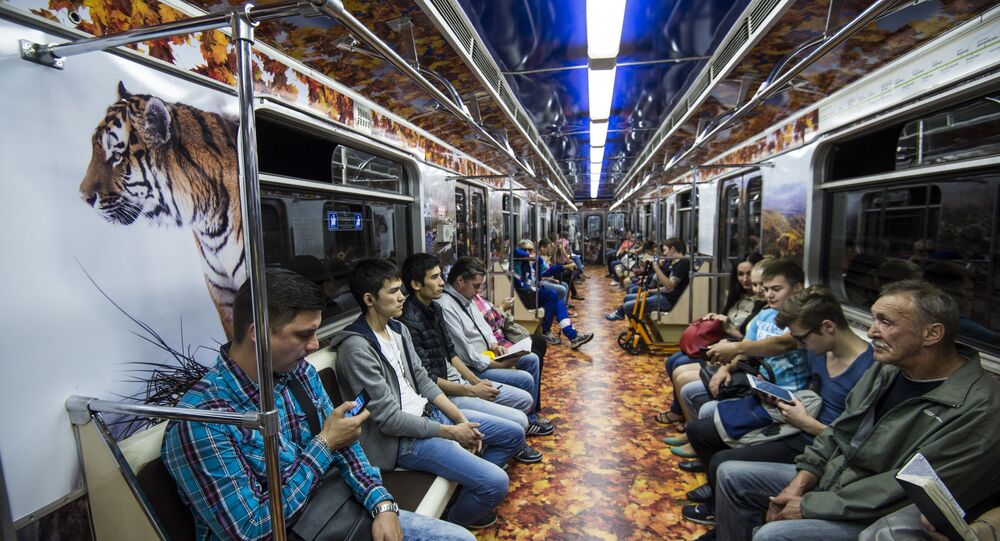 Lucky commuters on the Moscow metro underground network will be accompanied on their travels by Amur tigers from Sunday, when a new train decorated with images of the tiger and its Far Eastern habitat began traveling on the railway network to commemorate Amur Tiger Day.

Amur Tiger Day on September 27 is being celebrated in style by the Moscow Metro, where a specially-created tiger train began running for passengers on Sunday.

"From today, September 27, a train decorated with the flora and fauna of the Far East begins traveling on the Lyublinskaya Line of the Moscow Metro," announced Ivan Ostashko, spokesman for the Moscow Metro.

"The project aims to popularize the image of one of the rarer members of the cat family, and foster a caring relationship to their existence in our environment."

Once threatened with extinction, the tiger population has increased from a nadir of just 40 wild individual tigers in the 1940s, thanks to a conservation effort by wildlife organizations and the Russian government, which granted the tiger full protection.

Since the 1980s the number of tigers in the wild has stabilized at around 540 specimins, which live in the Sikhote-Alin mountain range in the Primorski and Khabarovsk provinces of Russia's Far East, and small pockets of the border area of China.

The new tiger train will be a permanent addition to the Moscow metro's collection, and is the eleventh decorated train to join the network; the newest addition is the first to also feature images depicted on the floor of its eight wagons.

"The coating for the floor is very wear-resistant, and underwent testing at Lubyanka station," explained Oleg Zaitsev, director of the Moscow metro's rolling stock. "All the work was completed in four days."

As well as the tiger train, the Moscow metro has ten more theme trains in its stock. Others include the 'Red Arrow' train, which was created to mark the 75th anniversary of the famous 'Red Arrow' passenger train that started running between Moscow and St Petersburg in 1931, and the 'Watercolor' train, which is decorated with copies of artwork from the Pushkin Museum of Fine Arts.