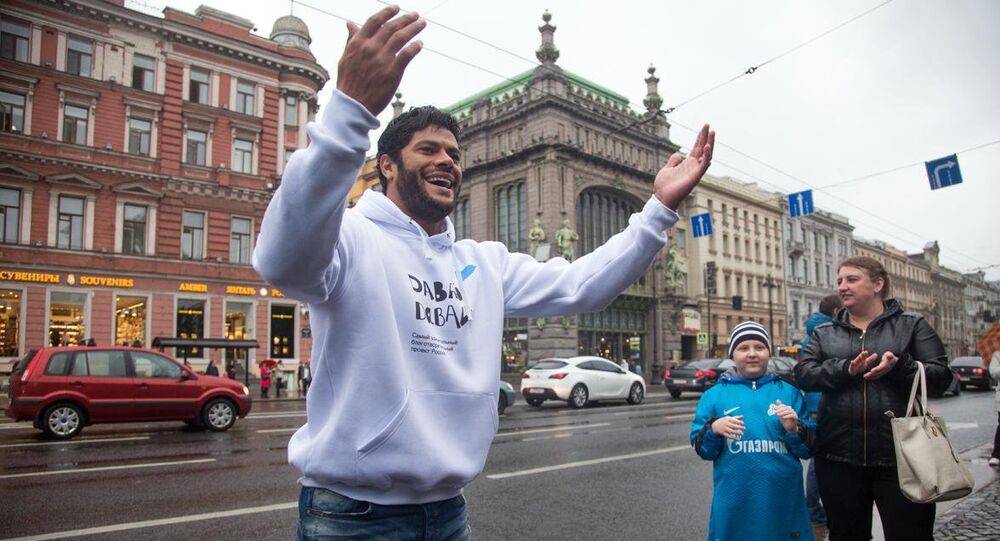 The Brazilian footballer, who plays for Zenit St. Petersburg, gave an impromptu concert on the city's main thoroughfare after supporters raised more than $20,000 for a children's charity.

Hulk's serenade was prompted by a campaign from Zenit St. Petersburg and the charity foundation Rusfond  to raise money for children suffering from serious illness.

The campaign was launched at the beginning of 2015 and challenges footballers, coaches and famous supporters of Zenit to do something very unusual, on the condition that enough money is raised to treat a child who is ill.

When he learned that supporters had succeeded in raising the funds, Hulk carried out his part of the deal, and traveled to the center of St. Petersburg after training on Monday.

Hulk chose to sing 'Ai Se Eu Te Pego,' by Brazilian singer Michel Telo, which became an international hit after it was released in 2008.

Arriving at Nevsky Prospect, the Brazil footballer, who was the top scorer in Russia's Premier League last season with 15 goals, met with Artyom and gave him his Zenit St. Petersburg football shirt, before he started singing for amazed passers-by.

"I am glad to use this opportunity to congratulate Rusfond and Zenit for the wonderful 'davai davai!' (Russian for go! go!) project, and I am really glad that I could take part and help Artyom."

"I hope that together we can help even more children, and I think that all of us can make a contribution to our children's health."

"I think it's important to help not only financially, but to use our names to make people take notice of charities and the problems children have. I'm a father and I know how important it is for a child to receive care and attention."

"I wish Artyom health, right now he needs it very much!" said Hulk.

Anna Brusilova, the organizer of the St. Petersburg branch of Rusfond, thanked Hulk for taking part.

"We hope that other footballers and famous supporters will follow his example, and as a result more children suffering from illness will get the funds they need for treatment – and the residents of our city can expect a new surprise!"