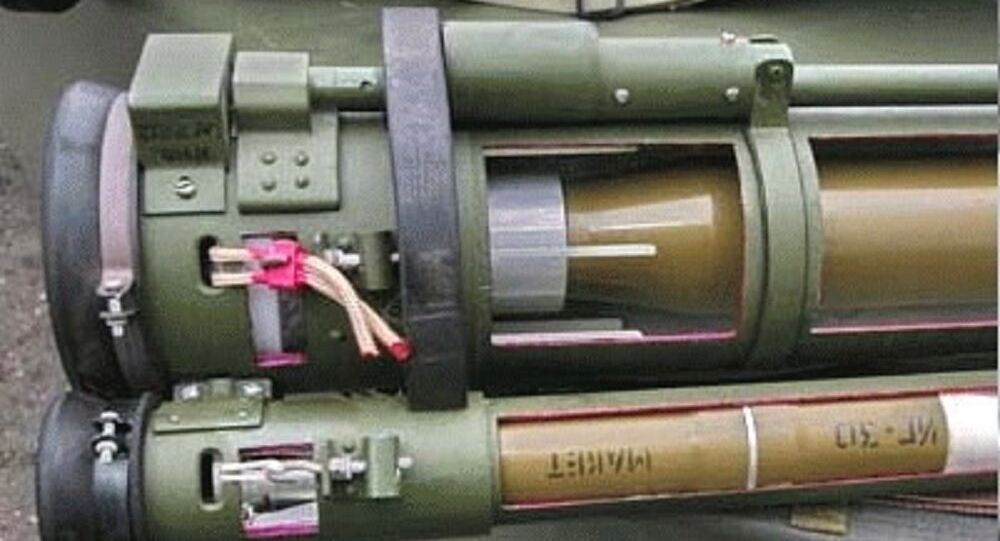 Even though the RPG-30 "Kryuk" anti-tank grenade launcher took a back seat to the formidable Armata tank at this year’s Russia Arms Expo, specialist interest in this deadly weapon was nonetheless just as great.

The RPG-30 is a man-portable, disposable anti-tank rocket launcher with a single shot capacity. It was designed to challenge reactive armor and active protection systems on tanks.

The RPG-30 cleared its testing program and entered service in 2012–2013 and was immediately put on the Pentagon’s list of “asymmetrical threats to the US armed forces.”

Youtube
Fearless Guardian: US Teaches Ukraine to Shoot Soviet-Era Grenade Launcher
The RPG-30 is not sold abroad yet and will not be any time soon, even though it enjoyed a great deal of interest from China, India, Lebanon, Cuba and the CIS countries.

And also from the US, Canada, Germany, France and Italy whose representatives were trying hard to learn the secrets of “merciless Russian grenade.”

The RPG’s main round, the PG-30, is a 105-mm tandem-shaped charge with a range of 200 meters and a stated penetration capability in excess of 600 mm of rolled homogeneous armor.

Reactive armor, including explosive reactive armor, can be defeated with multiple hits into the same place, such as by tandem-charge weapons, which fire two or more shaped charges in rapid succession.

In addition to the main round in its main tube, the RPG-30 also features a smaller diameter precursor round in a side tube.

The precursor round is fired shortly before the main round and acts as a decoy, tricking the target's active protection into engaging it.

© Sputnik / Vadim Savitskii
Russia to Deliver Advanced Anti-Tank Missile Systems to Foreign Customers
The APS is not ready to engage again until 0.2–0.4 seconds later, allowing the main round time to hit the target.

The 105mm PG-30 grenade is almost identical to the one used by the RPG-29 “Vampir” launcher, which made easy work of Israel’s Merkava tanks in Lebanon and the US M1A2 Abramses and British Challengers in Iraq.

The RPG-30 is smaller than its RPG-29 predecessor being just over a meter long compared with the cumbersome 2 meter Vampir.

In the Russian armed forces the RPG-30 is used alongside older RPG-22 and RG-26 versions which are very effective against trucks and light-armored AFVs.

The RPG-30 was designed with more serious targets in mind though as it can knock out heavy tanks, even those protected by modern reactive armor.