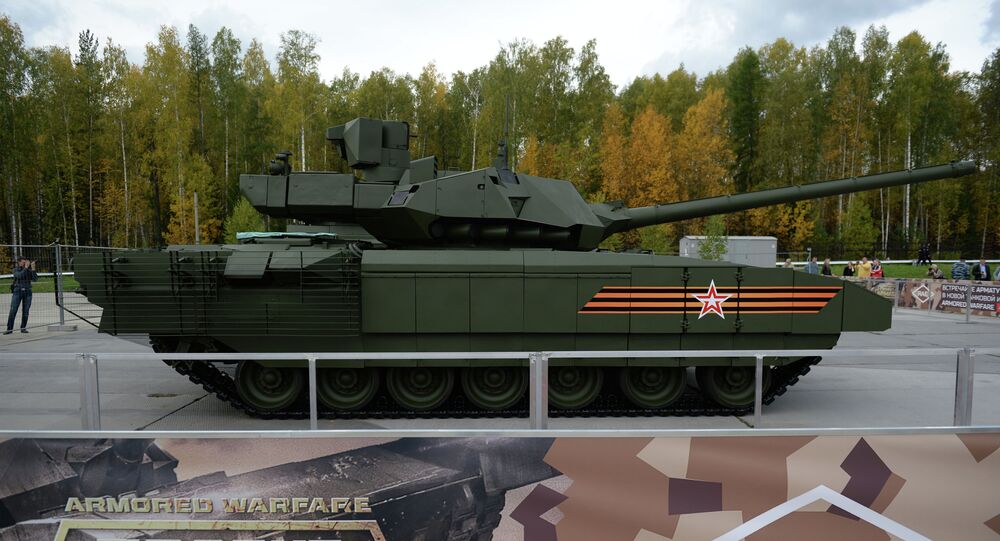 The designers of Russia’s T-14 Armata main battle tank have unveiled more details of what is arguably the best armored vehicle ever built.

YouTube/Zvezda TV channel
Russia's State-of-the-Art Armata Tank Performs New Stunt
First off, the tank’s engine and gearbox are built as a single whole, which facilitates its repair and replacement.

Uralvagonzavod representative Oleg Zozulya did not elaborate on the engine’s details, saying only that the Armata tank featured the most powerful engine ever built for Russian tanks, which means that the engine packs at least 1,500 horsepower.

The tank’s speed is another big secret, but, judging by what they saw during the the May 9 Victory Day parade debut on Moscow’s Red Square, it could be in the ballpark of 100 kilometers an hour.

The tank crew is securely enclosed in a multi-layer armored capsule separated from the ammunition container. The vehicle is fully computerized and remote-controlled via a high-resolution video cameras that directs its movement, track targets and activates the tank's defense systems.

This frees the crew from performing routine tasks to allow it to focus on key combat functions.

"For the crew, it's like playing a video game," said Ilya Demchenko, one of the Armata's designers.

The Armata's chief designer, Andrei Terlikov, said that the new technologies built into the Armata could make it possible in the future to build a fully robotic vehicle that would operate autonomously on the battlefield.

© Sputnik / Valery Melnikov
Cost of War Machines: Russian Armata vs US Abrams
The Armata uses a new type of armor, which designers say is significantly more resistant to enemy fire. On top of that, the vehicle is protected by an improved version of reactive armor, which explodes on impact to stop a projectile from reaching the main layer of armor.

The tank’s modular structure also allows for quick and easy modernization of its elements and systems.