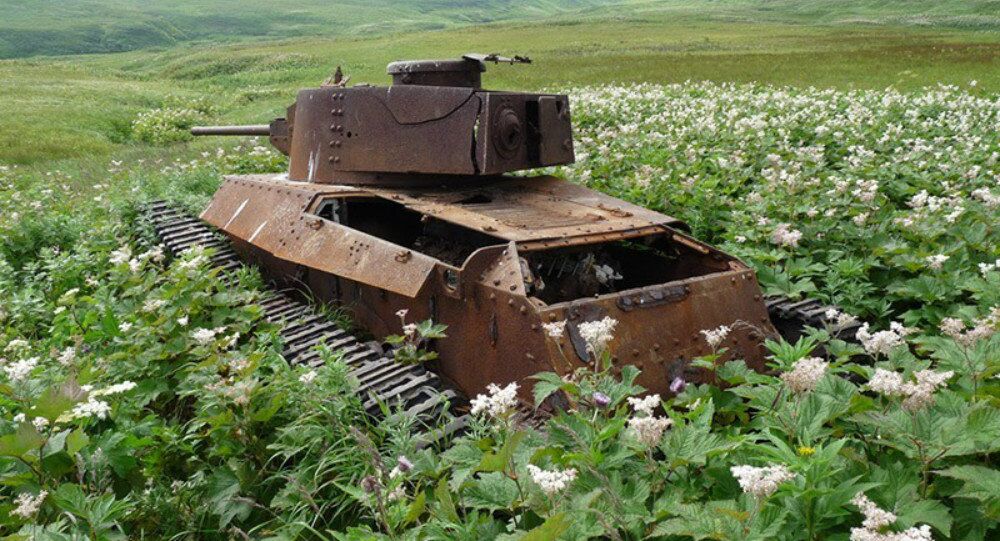 The tank was found by a search expedition on the island of Shumshu, the most northern of the Kuril Islands, where Soviet paratroopers carried out a successful military operation to liberate the territory from the Imperial Japanese Army in 1945.

© Sputnik / Vladimir Fedorenko
Half of Former Japanese Kuril Residents Believe Islands to Remain Russian Territory
A search expedition to the Russian Kuril Islands has found an intact tank belonging to the Imperial Japanese Army on the northernmost island of Shumshu, which was occupied by the Japanese during the Second World War.

The find was made during the course of an expedition carried out jointly by the Russian armed forces, the Russian geographical society and the Russian Search Movement, a public movement to honor the memory of those killed in action while defeding their homeland.

The tank has been loaded onto a  Pacific Fleet cargo ship, to be examined on the mainland, said General-Major Vladimir Popov, head of the Russian Search Movement.

© Sputnik / Yuriy Somov
Russia Needs Advanced Military Group Stationed on Kuril Islands - Medvedev
The vehicle has been identified as a 'ShinHoTo Chi-Ha' medium Japanese tank, and may end up in Russia's Central Museum of Armored Vehicles, the largest of its kind in the world, located in Kubinka, close to Moscow.

Around 70 people, ten units of special equipment and Mi-8 and Mi-26 helicopters have set up camp near the Kurbatov lighthouse in order to carry out the expedition to Shumshu, which lies around 11 kilometers from the southern tip of the Kamchatka peninsula on Russia's mainland.

The search aims to find the remains of fallen Soviet and Japanese soldiers on Shumshu, who will be returned to their respective homelands for burial, and also look for military equipment including tanks and planes left by the Soviet and Japanese troops.

© Sputnik / Sergey Krivosheyev
Kuril islands
The current search, which will continue until September 24, is not the first to have found find military equipment on the island, where Soviet troops landed when carrying out the successful military operation that liberated the Kuril Islands in 1945.

In September last year a search party of around 50 military experts on Shumshu found two Japanese steam engines, an amphibious tank and an American fighter jet.