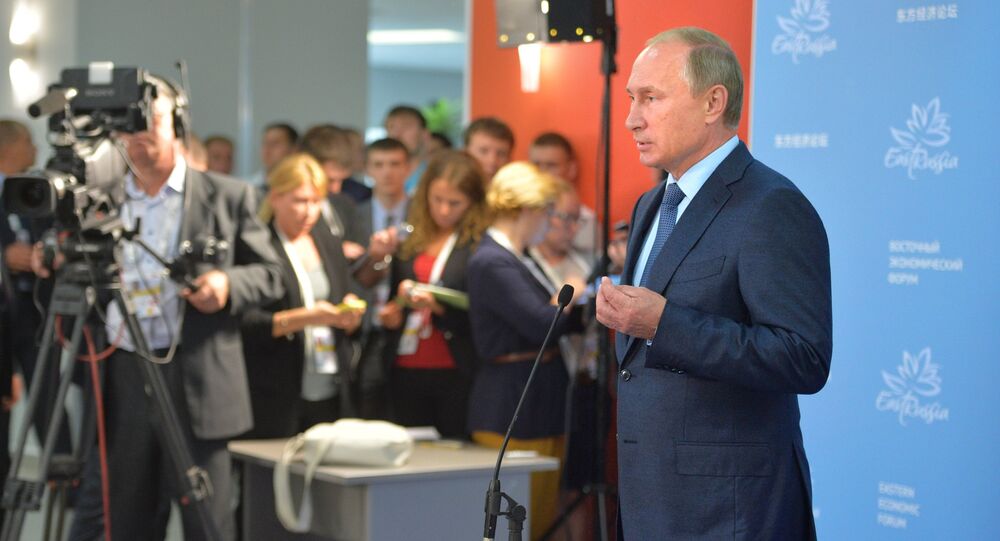 Apart from the Russian economy, its dependence on oil prices, and the economic development of Russia’s Far East, President Putin touched upon the politics of Ukraine, the EU and US, Europe’s attitude towards the Second World War and much more at the Eastern Economic Forum (EEF) in Vladivostok on Friday.

Then he talked to journalists and here is a number of key topics he touched upon.

"Ukraine is under external control, all the key posts in the government are held by outsiders, and now foreigners even hold key posts in the regions — this, I think, is an insult to the Ukrainian people."

“Really, in Ukraine are there no orderly, honest, capable managers? Of course there are,"

“With regards to the tragic events [the recent clashes outside the Verkhovna Rada], I think they are completely unrelated to the recent amendment to the constitution, because what are now being presented as the amendments are absolutely of a declarative character and, in fact,  are not changing the power structure in Ukraine [….] The amendments are being used solely as a pretext for escalating the political struggle for power.”

© Sputnik / Alexei Kudenko
National Paradox: Ukrainian Local Elections as Pretext for New Anti-Russian Sanctions
"I want to emphasize that the amendments to the constitution of Ukraine are stipulated in the Minsk agreements, but they must be implemented in the course of talks and dialogue, in coordination with the representatives of Donbass, the territories of the unrecognized DPR and LPR republics.

Unfortunately, the authorities in Kiev are doing nothing of the kind and there is no coordination on the amendments to the Ukrainian constitution.

This is an important and principal issue. If we are talking about the implementation of the Minsk agreements, I remind you: the amendments should be agreed upon with Donbass. First,  the law on the local elections should be coordinated with Donbass; second, there  should be a law on amnesty, it has not been adopted. And third, the law on the special status of these territories should be executed. It is adopted, but its execution has once again been postponed.”

“I think the crisis was absolutely expected. We in Russia, and me personally several times said it straight that pervasive problems would emerge, if our so-called Western partners continued to maintain their flawed, as I always stressed it, foreign policy, which they pursue to date, especially in regions of the Muslim world [such as] Middle East, North Africa.

What kind of policy is it? It is the imposition of their own standards worldwide without taking into account the historical, religious, national or cultural characteristics of particular regions.

And it is, first of all, the policy of our American partners. Europe is blindly following this policy within the framework of the so-called allied liabilities, and in the end shoulders the entire burden.

I am now quite surprised that some of the American mass media are criticizing Europe for what they consider to be excessive cruelty towards migrants.”

“I think all of us are witnessing the attempts of a certain blurring of the significance of the events of the Second World War. Unfortunately, it is now taking place in Europe, and we are witnessing similar tendencies in Asia.

© AP Photo
ISIL Uses Chemical Weapons to Make Up for Defeats in Iraq, Syria - Lawmaker
“We are taking certain steps, and do it publicly. If you are interested in the details, then I could tell you that we really want to form a certain international coalition on the fight against terrorism and extremism. For this purpose, we are holding consultations with our American partners as well. I've  personally discussed this issue over the phone with the US president. I've also discussed it with the Turkish president, with the Saudi Arabian leadership, with the King of Jordan, and with the Egyptian president and other our partners.”

Readiness for Military Action in the Fight Against the Islamic State

“It is a separate issue; we see what is going on – the American [air units] are making certain strikes. The efficiency of these air strikes is low. But it is premature to say that we are ready to do the same. We are providing serious support to Syria: equipment, training for military personnel and armaments.”

“Of course, we are aware that there are different approaches towards the developments in Syria.

By the way, the people aren't fleeing from the regime of Bashar Assad. They are fleeing from ISIL, which has seized their territories, including considerable parts of Syria, Iraq.

And [ISIL militants] are committing atrocities there. Thus people are fleeing from those territories.”

Putin: The Far East is Key to Russian Economic Development