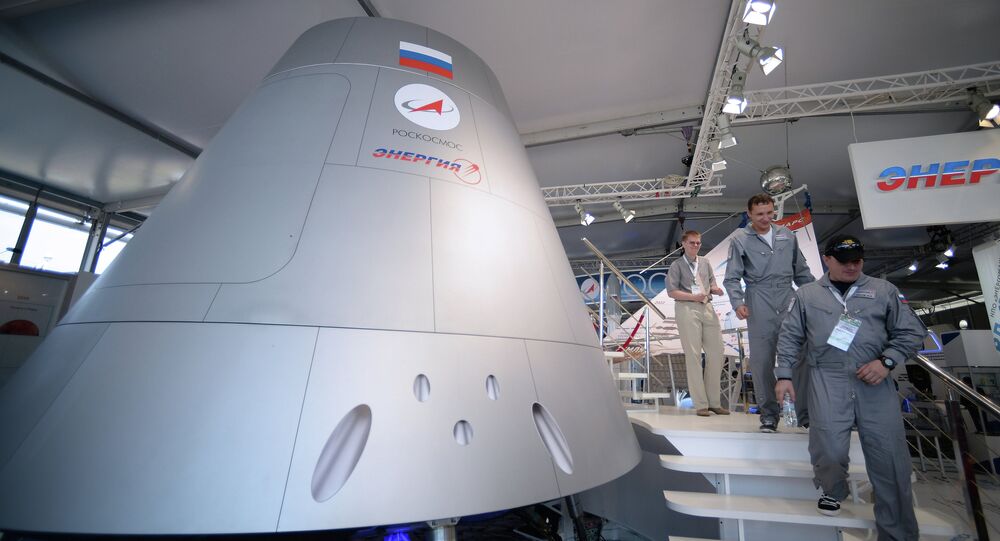 Russian space manufacturer RSC Energia said that the first prototype of a new Russian manned spacecraft for launch to the International Space Station (ISS) and the Moon may be created ahead of schedule.

ZHUKOVSKY (Sputnik) — The first prototype of a new Russian manned spacecraft for launch to the International Space Station (ISS) and the Moon may be created ahead of schedule, president of Russian space manufacturer RSC Energia Vladimir Solntsev told RIA Novosti on Saturday.

The International Aviation and Space Salon MAKS 2015 is currently underway in the town of Zhukovsky near Moscow, and is due to finish on Sunday.

"We have agreed with the engineers…. to reduce the time for construction and production of the first copy of this spaceship. Despite the fact that we have voiced and agreed on the first launch in 2021, we have set the task to build the prototype by 2019, and I think that we will succeed, " Solntsev told reporters at the MAKS.

ESA
NASA Rushes Tools to Russian Spaceship After Helmet Leak
The new generation spaceship is designed to deliver astronauts and cargo to the Moon and the ISS, Solntsev said, adding that the spaceship is reusable and is due to perform at least ten flights.

"Unlike Soyuz spacecraft which is currently used and requires three people to fly, the new ship can host four people," Solntsev said, adding that the new prototype is larger than Soyuz.

The Russian-made Soyuz spacecraft, which was designed during the Soviet era and remains in service today, is launched on a Soyuz rocket, one of the most frequently used launch vehicle in the world.

Vladimir Solntsev also said that Russia is planning to test a fundamentally new and unique rocket engine of the new generation designed for carriers of any class in 2016.

"I initiated on behalf of RSC Energia, as the management company for NPO Energomash [Russian rocket engines producer] to create a modern pulse detonation rocket engine…. Fire tests of the engine, which has not been named yet, with operating temperature of about 6000 degrees [Celsius] in combustion chambers are planed for early 2016," Solntsev told reporters at the MAKS.

After successfully undergoing all the necessary tests, the engine will be used in the launchers of light, medium and heavy class, Energia chief added.

© Sputnik / Mikhail Voskresenskiy
Breakneck Speed: New Russian Jet Engine to Propel Aircraft to 9,000 Kmh
In 1940, prolific Soviet scientist Yakov Zeldovich proposed an innovative idea of ​​the possibility of using the energy of the detonation combustion, or the burning of the fuel mixture in the mode of self-ignition following a strong impact wave, which was expected to have much higher Coefficient of performance. Later, his theoretical assessments were proved.
...
Reddit
Google+
Blogger
Pinterest
StumbleUpon
Telegram
WhatsApp
654