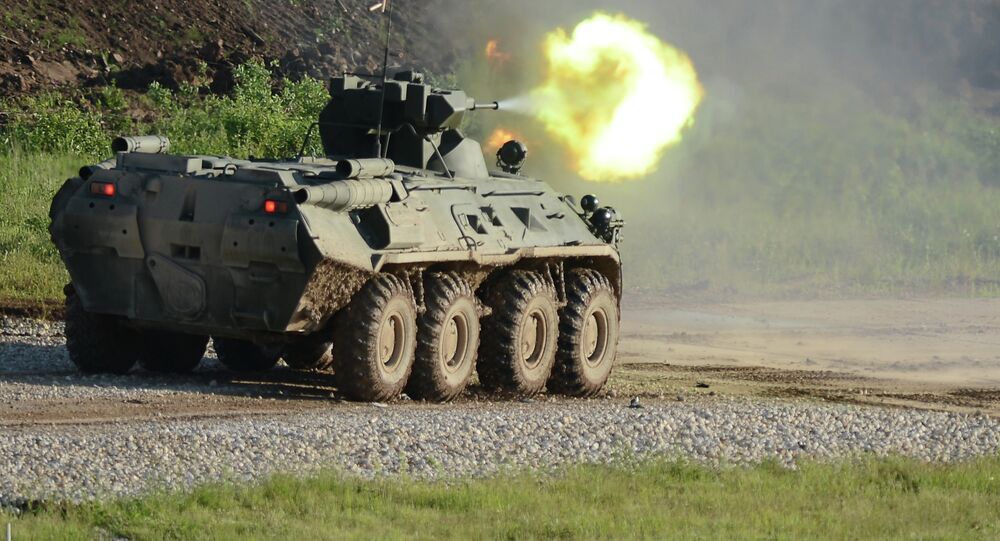 The BTR-82A is one of Russia’s latest 8x8 wheeled infantry fighting vehicles; its silhouette is the sole reminder of its predecessor, the BTR-80A.

© Flickr / USAFE
US Stryker Carrier Outgunned by Russian Armored Vehicles
Hailed by defense specialists as a full-fledged combat vehicle, the BTR-82A created a big stir in late-2010 with its 2A72 30 mm chain gun, coaxial 7.62mm MG and advanced observation gear, making it ideal for regular combat and counterterrorism operations alike.

It is also fitted with a full stabilization system, which allows for accurate firing on the move in all conditions, thanks to the new day and night sights.

Other new features include a laser rangefinder.

A new type of active shielding, adapted for use with high-speed and highly maneuverable combat vehicles, is in the works now to make the BTR-82A practically immune to grenade launchers.

Although the all-steel construction, which provides protection against machine gun fire and artillery splinters, looks unchanged on the surface, improvements against mines and IED’s have been added to the lower hull.

Kevlar-type liners have been fitted to the inside of the hull, providing better all-round protection.

The BTR-82A boasts a new 300hp engine and suspension system, which offers it the ability to absorb the energy from a landmine. It also retains the same fully amphibious capabilities of the earlier BTR-80A.

The ripple effect created by the BTR-82A’s 30 mm automatic gun has been felt far and wide, with US Army officials saying that one of their most important units in Europe — the Stryker-equipped 2nd Cavalry Regiment — is outgunned by its Russian counterparts and needs a fast-track upgrade.

The US Army staff in April approved a request from the unit's commander, Colonel John Meyer, to fit a 30mm cannon on 81 of the infantry carriers,  so that it to could engage similar units or light-armored vehicles.

While the US military is only thinking about how best to ramp up the combat efficiency of its IFVs, Russia is already testing its modernized armored vehicles, which are capable of engaging the enemy at any time of day or night without any additional support.

In addition to the BTR-82A, Russia also has the BMP-3 amphibious IFV; its powerful 100mm cannon and 30mm chain gun can effectively engage a whole enemy battalion.

All this meaning that Russia’s armored vehicles are light years ahead of their Western counterparts, no matter how modernized the latter may be…