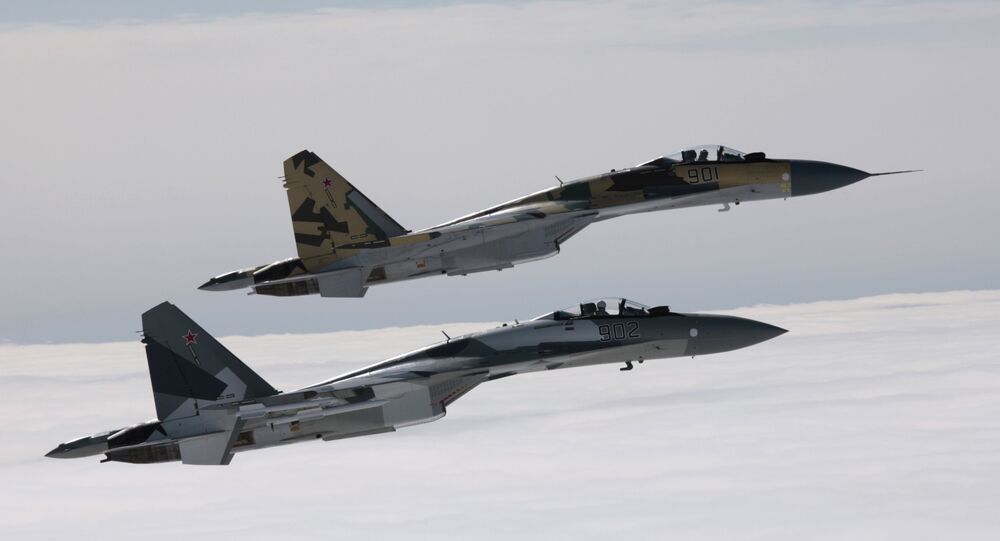 The Sukhoi Su-35 is set to follow in the wake of the Soviet Union's legendary Su-27 and Su-30 fighter jets in becoming a major military export.

© AP Photo / Ivan Sekretarev
Russia’s Sukhoi Superjet Production Unaffected by Western Sanctions
Negotiations for the export of the Sukhoi Su-35 fighter jet are coming to fruition, with orders from buyers in South American and Asian countries expected to be agreed upon in the near future, sources close to talks on the export of the aircraft have told military correspondent Ilya Kramnik.
© Sputnik / Grigori Sysoev
Russia to Buy as Many T-50 PAK-FA Fighters as Manufacturers Can Produce
The Sukhoi Su-35 fighter is a single-seat twin-engine super-maneuverable multirole fighter, built by the Komsomolsk-on-Amur Aircraft Production Association in Russia's Far East and designed by Sukhoi, which has a contract to deliver 48 of the planes to the Russian Air Force before the end of 2015.

© AP Photo / Francois Mori
A Sukhoi SU-35 jetfigther performs its demonstration flight during the 50th Paris Air Show at Le Bourget airport, north of Paris
Writing in Lenta.ru, Kramnik reports that the sticking point between the Russian and Chinese negotiators over the size of the order is nearing a resolution, and expects a compromise order of 24 fighters for China's Air Force.

Sukhoi: The Legend of Russian Aviation