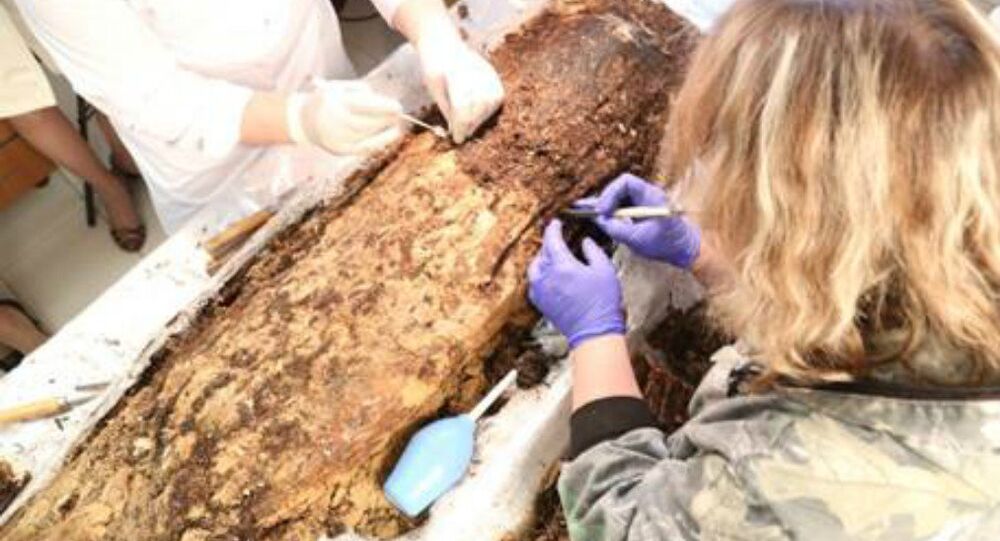 Scientists in Russia's far northern Yamalo-Nenets Autonomous Region have been investigating the mummified remains of a human child, wrapped in a cocoon of furs and tree bark, local media report.

Finding the 1.3m-long, 30cm-wide cocoon earlier this summer during excavations in the Priuralsky district, scientists used computed tomography imagining to determine that it contained the body of a male child, between six and seven years old. The burial is believed to date back to the 13th century.

Experts at the I.S. Shemanovsky Yamal-Nenets District Museum and Exhibition Complex worked slowly and painstakingly to uncover the remains, taking hours to unwrap the cocoon, layer by layer. The work was recorded by photo and video camera in order to avoid missing any details.

mvk-yamal.ru
Scientists uncovered the mummified remains of a young boy, wrapped in layers of fur and tree bark, and buried along with a small bronze axe, a figurine of a bear and several silver temple rings.

The scientists' study of the remains of the child concluded that he had suffered from hunger or serious illness, pointing to the so-called Harris growth arrest lines found on the boy's bones. Experts concluded the remains to be that of a small boy on the basis of the small bronze axe lying by his side. A small figurine of a bear and several silver temple rings also accompanied the remains. The body itself was wrapped in a blanket of soft fur, with a series of copper plates resting on the blanket, fastened by leather belts. The next layer was covered with fur of a firmer character, followed by layers of tree bark and firmer inner tree bark.

Scientists concluded that the find dates back to the 13th century, but the exact time of burial, the sex, age and status of the child and his cocoon sarcophagus can only be determined through further analysis.

© Photo : Twitter/OnLineMan
Mummified Monk Found Inside Ancient Buddha Statue
The unique find was made earlier this summer near the village of Zeleniy Yar in the Priuralsky district of the Yamalo-Nenets Autonomous Region, 29km short of the Arctic circle. In mid-June, scientists from Yamal, Tyumen and Ekaterinburg carried out the first analysis of the mysterious cocoon.

Archeological digging in the area first began in 1999 under the direction of famous Yamal archeologist Natalya Fedorova. At present, the dig site is divided into three areas, including a foundry dating back to the 5th-8th centuries, and two burial sites, one from the 8th-9th centuries, and another from the 12th-13th centuries.