As a cargo ship loaded with endangered, Icelandic Fin whale meat travels en route to Japan, animal rights activists may have an unlikely ally: Baywatch icon Pamela Anderson. She, in turn, has written a plea for help to what may seem an even unlikelier ally: Russian President Vladimir Putin.

Last week, the Sea Shepherd Conservation Society spotted the Winter Bay, a cargo vessel registered with Saint Kitts, docked a long way from home. Stocked with 1,700 pounds of illegally captured whale meat and refused passage through the Panama or Suez canals, the ship is currently moored in Tromso, Norway, awaiting permission to travel through the icy waters of the Northwest Passage.

That would send the vessel through Russian territorial waters, which has led animal rights activist Pamela Anderson to call on the help of Moscow’s most celebrated outdoorsman.

"I believe that we both share a mutual love for animals and a deep respect for nature and for this reason I would like to make a personal request to you, on behalf of endangered Fin whales," Anderson wrote in a personal letter addressed to the president by his full name, Vladimir Vladimirovich Putin, on Sunday.

She describes how the whales were hunted in violation of the International Whaling Commission’s ban, and that it’s a breaches international law to commercially trade endangered species.

"President Putin, you can stop this illegal transit by forbidding this vessel from carrying a cargo of endangered Fin whale meat through Russian waters to Japan."

If agreed to, Putin and Pam could help bring down international whale poachers.

"I would like to respectfully ask you to consider investigating this shipment and to do what you can to prevent it from transiting to Japan an illegal cargo. Your decision could put an end to the needless slaughter of endangered whales by Iceland."

Anderson, representative of the Pamela Anderson Foundation, has the full support of the Sea Shepherd Conservation Society.

"Pamela Anderson has established herself as an influential and powerful voice for animals and the environment," Sea Shepherd Founder, Captain Paul Watson, said on the organization’s website.

"Her name is well known throughout the world, including Russia, and Pamela understands very well that celebrities have the power to reach the ears of the powerful with important messages that would otherwise not be heard."

The letter was signed, “Yours Sincerely, Pamela Anderson,” so whatever President Putin decides, he at least has the celeb’s autograph. 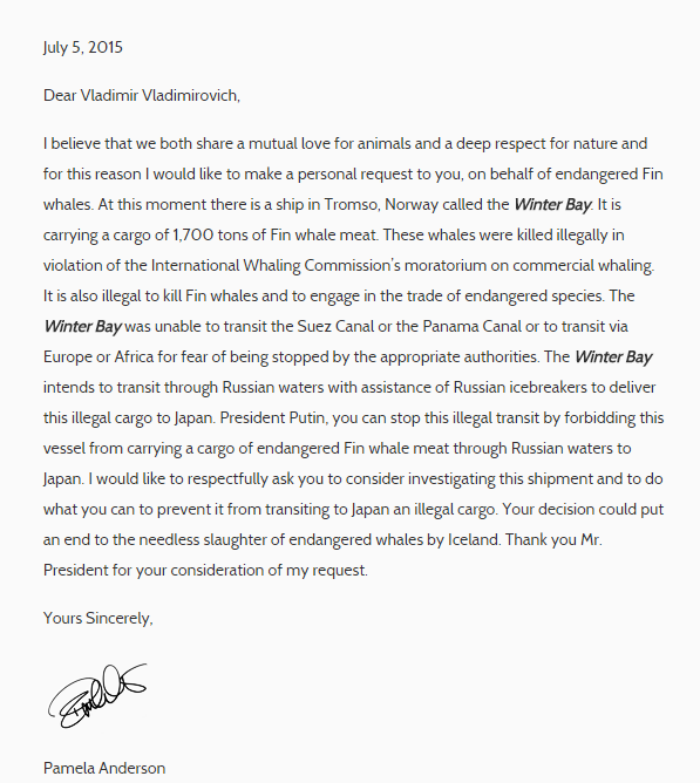