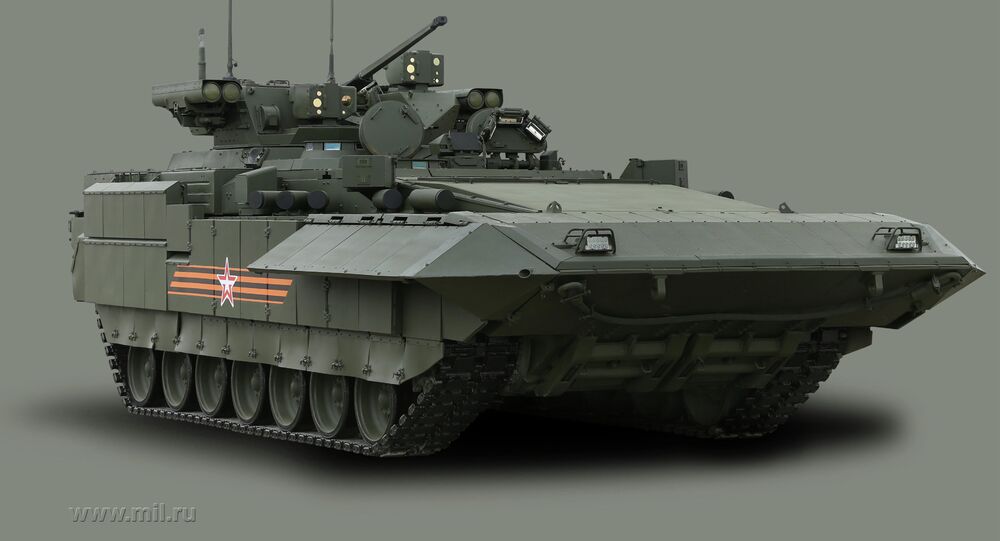 The brand-new Russian T-15 heavy infantry combat vehicle, based on the Armata Universal Combat Platform, is destined to play a decisive role in modern warfare, according to the Russian television network Zvezda.

Created by the Uralvagonzavod Research and Production Corporation, the T-15 is expected to replace the BMP-2 amphibious infantry fighting vehicle and the MT-LB multi-purpose fully amphibious armored vehicle based platforms of the Russian Ground Forces.

"Modern warfare necessitates a rapid response. It is safe to say that Armata-class tanks, along with the T-15 and other state-of-the-art armored vehicles, help resolve…any military problem in a quick and efficient way," Khalitov said.

The T-15 has a number of advanced features, and like the T-14, it is protected by reactive armor and the Afghanit active protection complex.

Host photo agency
An infantry fighting vehicle with the Armata Universal Combat Platform at the final rehearsal of the military parade to mark the 70th anniversary of Victory in the 1941-1945 Great Patriotic War.

This system is equipped with Doppler radar to detect incoming projectiles, including rocket-propelled grenades and anti-tank missiles. Once detected, the active defense system launches an interceptor rocket that destroys the incoming projectile.

Importantly, the T-15's armor is made of a newly developed armor made from steel, ceramic and composite materials. This enables the T-15 to be deployed on a battlefield alongside Armata tanks, not behind them, thus making it possible to deliver infantry landing units right in the middle of the fight. In contrast, Soviet and older Russian-made armed personal carriers had light armor and were supposed to keep a secure distance from the firing line.

© AP Photo / Alexander Zemlianichenko
Armata Designers: This May be the First Unmanned Drone Tank
As far as armaments are concerned, the T-15 features the Epoch Remote Control Turret with its 2A42 30-mm auto cannon, a 7.62- mm coaxial PK machine gun and a bank of two Kornet-EM anti-tank guided missiles on either side.

Khalitov remains upbeat about the future of the T-15, which he said can be modernized and adapted into a completely new armored vehicle HQ, which will enable the command to safely stay on the battlefield without fearing for their lives.