Russia faces a whole array of risks, including those near its borders, which is why a strong army with modern weapons guarantees the country's sovereignty and territorial integrity, according to Russian President Vladimir Putin. 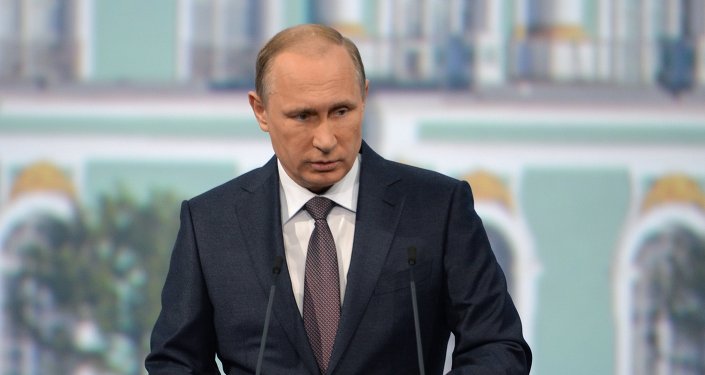 © Sputnik / Alexei Danichev
War of Words Does Not Mean Real War is Close at Hand - Putin
Speaking at a reception honoring the graduates of Russia's higher military educational establishments on Thursday, President Vladimir Putin pointed to a wide array of challenges the country faces near its borders, and called for a strong army that he said should be equipped with the most advanced weapons.

According to him, such an army will become the guarantor of the country's sovereignty and territorial integrity, the Russian news agency Ria Novosti reported.

"A strong army equipped with sophisticated weapons guarantees Russia's sovereignty and territorial integrity. It also guarantees that millions of our fellow citizens can live in peace. I am sure you understand it quite well," Putin said.

He assured that Russian authorities will continue the development of the Russian Armed Forces, completing recently launched structural reforms to improve the effectiveness of military management systems and efficiency in decision-making.

Touting the strengthening of Russia's strategic nuclear forces and space defense units, Putin also praised the increasing combat capabilities of almost all branches of the armed forces. He mentioned the ongoing delivery of state-of-the-art aircraft, submarines and surface ships to the Russian military, which is also being equipped with high-precision weapons, combat robots and unmanned aerial vehicles that were showcased at the recent International Military-Technical Forum Army-2015.

At the same time, Putin stressed that Russia's doesn't have any aggressive plans and is not a threat to any other countries.

"Russia is a country that is open to the world and that stands for strengthening cooperation with all who are ready for it," Putin said.

According to him, Moscow "does not have and cannot have aggressive plans."

"We do not threaten anyone and we are trying to resolve any disputes exclusively via political means; we respect international law and the interests of other countries," Putin said.

© REUTERS / Anna Krasko/Agencja Gazeta
US Weapons in Europe Not Breaking Pact With Russia - Former NATO Commander
His remarks come at a tense period for Moscow's relations with the United States, the European Union and their allies, who accuse Russia of actively supporting pro-independence militias which are fighting government forces in Ukraine; Moscow denies these allegations.

It believes that NATO is amassing its forces in Eastern Europe and the Baltics, citing reports of the deployment of "counterforce" nuclear weapons in Europe, which threaten Russia's national security.