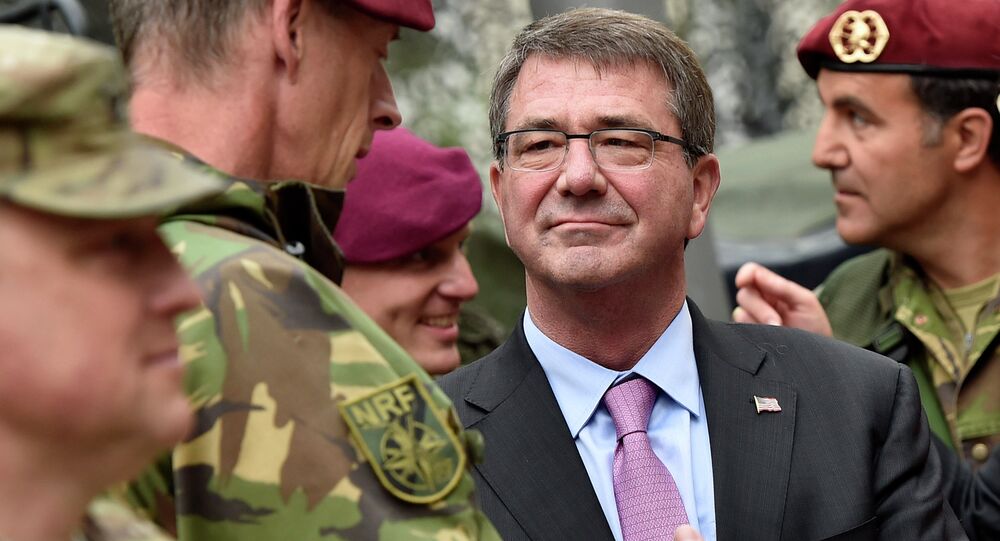 Under the plan, the US will contribute intelligence and surveillance capabilities, special operations forces, logistics, transport aircraft, and a range of weapons support that could include bombers, fighters and ship-based missiles, the Associated Press reported.

Carter announced the new details about the US contribution while in Berlin, the first of several stops in Europe.

© REUTERS / Franciszek Mazur/Agencja Gazeta
US, NATO Bracing for Long-Term Standoff With Russia Under Putin and Beyond

There has been no final decision on the number of troops that will participate, but the US says it will not provide a large ground force. However many US soldiers are committed will join troops from Germany, Norway and the Netherlands, which had agreed to provide the initial troops for the Very High Readiness Joint Task Force (VJTF).

No US troops or equipment will move immediately, but instead would be made available within 48-72 hours if requested, and approved by American leaders, in response to a crisis, the AP reported.

The West has long blamed Russia for interfering in Ukrainian affairs and posing a threat to European neighbors. Moscow has consistently denied the claims, arguing instead that it is Washington that is largely to blame for destabilizing the situation in Ukraine.

"Why do we have to do this? Do you seriously think that we want to unleash war with NATO?” he asked rhetorically in an interview with the Financial Times.

Nonetheless, Carter accused Moscow of attempting to expand its sphere of influence:

"Make no mistake: we will defend our allies, the rules-based international order, and the positive future it affords us. We will stand up to Russia's actions and their attempts to re-establish a Soviet-era sphere of influence."

Carter also encouraged Germany and other NATO members to increase defense spending. Hours earlier, while on a plane to Europe, the Pentagon chief said the United States and NATO are in the midst of a standoff with Russia that could last years or even decades.

"The adaptations I was talking are specifically in anticipation that Russia might not change under Vladimir Putin, or even thereafter," Carter told journalists aboard the plane.