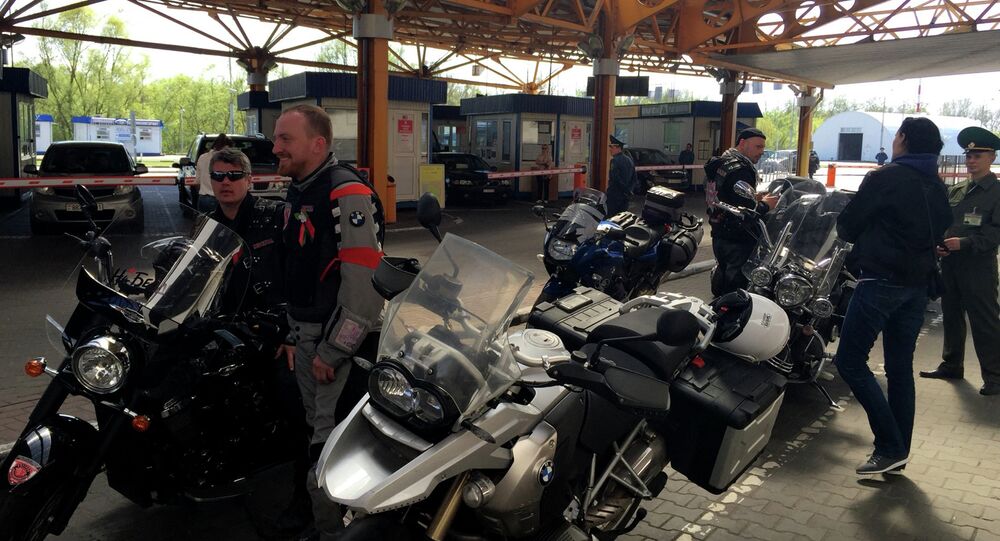 The Russian biker club Night Wolves is suing the Polish Border Guard over their decision to bar some of its members from entering Poland during the Moscow-Berlin motor rally.

© Photo : vk.com
Night Wolves' Mad Max Truck Wows Lugansk Residents
The Night Wolves, a prominent Russian motorcycle club, have filed a lawsuit against the Polish Border Guard in response to their refusal to grant entry to some Night Wolves members during a motor rally dedicated to the 70th anniversary of the victory of the Soviet Union and its allies over Nazi Germany in World War II, according to the Polish Press Agency.

The lawsuit was reportedly filed by Polish lawyers on behalf of the Russian motorcyclists, who signaled their readiness to sue Polish border guards last month.

The Night Wolves demand that the actions by the Polish Border Guard be recognized as illegal. They also want the restoration of entry visas and compensation for their losses.

"If the Warsaw court does not allow the claim, we will appeal. If that does not work, we will appeal to the European Court of Human Rights in Strasbourg," Sergey Ukhtinsky, a representative of the Night Wolves, said.

According to him, not all Night Club members were on their way to Berlin. Some of them were due to visit the Czech Republic, which hosted the 2015 World Ice Hockey Championship between May 1 and May 17.

"They paid for hotels and tickets for the matches. Several other people, who were going to Italy and Spain, also suffered financial losses," Ukhtinsky said, adding that Night Wolves members were also demanding compensation for moral damage.

Even though many bikers, including Night Wolves leader Alexander Zaldostanov, failed to enter EU territory due to visa problems, some finally managed to reach the German capital in order to wrap up the event.