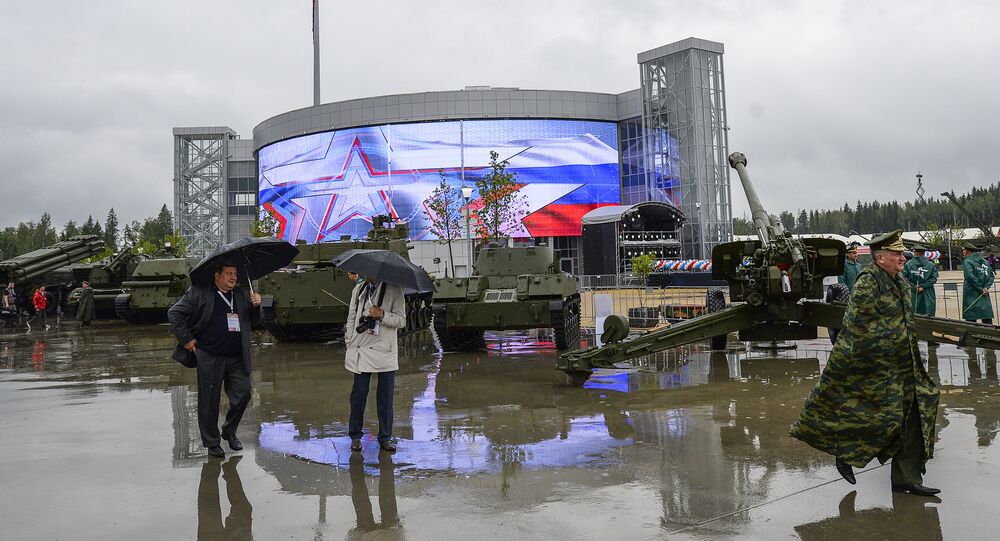 Russia opened its 'military supermarket' in the Moscow region on Tuesday, with representatives from over 70 countries expected to shop for arms and equipment.

Military representatives from over 70 countries gathered in suburban Moscow's Kubinka on Tuesday for the first ever Army-2015 military technology forum.

The exposition includes everything from ships and weapons systems to auctions for written-off military equipment available to the general public. In addition to Russia, 20 international companies are taking part in the exposition, including China, Germany, France and South Korea.

"The newly-built complex can be called a military supermarket where representatives of other countries' armed forces can look at, try out, test-drive an buy arms and military equipment," Russian Defense Minister Sergei Shoigu said at the opening of the exposition.

According to the head of Russia's Federal Service for Military-Tecnical Cooperation, the country's current arms export portfolio stands at $50 billion.

One of the first contracts signed at the exposition was with the Ministry of Defense of Belarus, which decided to buy 12 Mi-8MTV-5 transport helicopters. The helicopters are armored and can be used for both transport and combat purposes.

"The forum has acquired an international status, over 70 countries are participating in it," Shoigu said.

Speaking at the opening ceremony, Russian President Vladimir Putin pledged to continue the Russian military modernization with 75 to 100 percent new equipment in some branches planned as soon as 2020.

Putin stressed that Russian weapons and equipment remain in demand on the international arms market, with a strong portfolio to guarantee shipments in the future.

"It is obvious that the efficiency of the military-industrial complex is a most important resource for the growth of the entire economy. More than that, it is the defense industry that has to raise the bar for many technological and manufacturing parameters and henceforth remain one of the engines for the development of innovations, including those for civilian and dual-use," Putin said.

Russian shipbuilders presented several new projects including the 'Priboi' (Surf) helicopter carrier landing ship, which is meant as a replacement for Mistral ships, the delivery of which has been stalled by France. The new carrier, the construction of which is expected to begin in 2016, will be able to carry up to eight helicopters, 500 soldiers and 40-60 vehicles.

© Sputnik / Viktor Guseinov
Russia Plans to Fully Upgrade Fleet of Landing Ships by 2050
Another project, the Lider (Leader) missile destroyer presented at the exposition an be armed with 60 anti-ship cruise missiles, 128 ballistic missiles and 16 anti-submarine missiles. The new destroyer can operate autonomously for up to 90 days.

"Yes, we are interested, that's why we are here, and we are not only talking about the navy. We are interested in frigates, corvettes and guard ships. It's too early to compare prices, evaluate logistic and then we can make actual decisions," he said.

In addition to Saudi Arabia, Russia is currently in talks with India and Malaysia regarding naval equipment shipments.