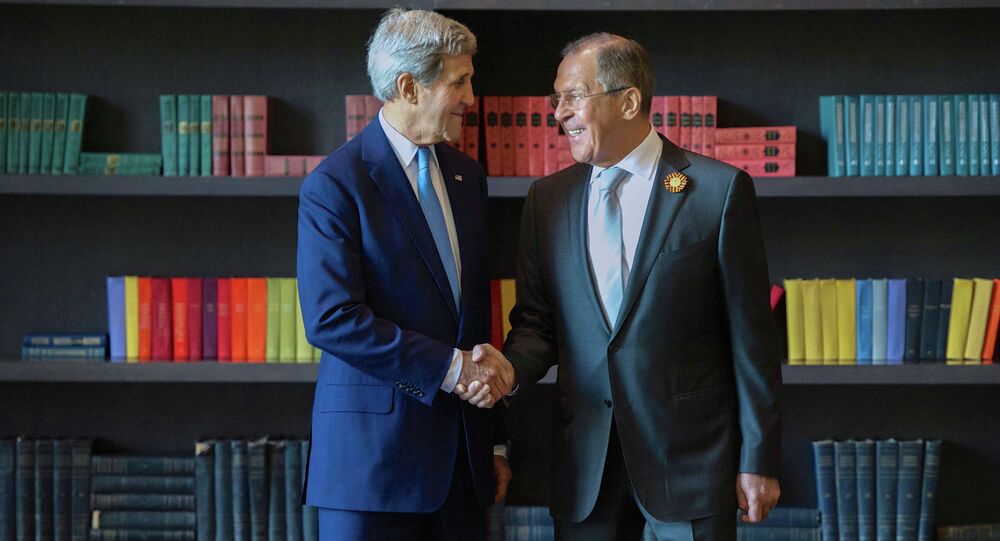 US State Secretary John Kerry's visit to Sochi was not a new 'reset' in relations between the US and Russia, Russian Foreign Minister Sergei Lavrov told Bloomberg.

© Sputnik / Iliya Pitalev
West Knows That Kiev Impeding Implementation of Minsk Deal in Ukraine - Lavrov
US Secretary of State John Kerry's visit to Sochi on May 12 was not a diplomatic "reset" but a return to normal relations, Russian Foreign Minister Sergei Lavrov told Bloomberg on Tuesday.

Kerry's meeting with Lavrov and Russian President Vladimir Putin in May generated speculation about its implications for US-Russian relations and the crisis in Ukraine.

"I think we are sufficiently realistic. President Putin talks to President Obama on the phone from time to time, the dialogue is pretty pragmatic, they discuss specific areas of cooperation where both countries could benefit," Lavrov told Bloomberg.

"I would call this a realization of the need for normalcy," Lavrov added.

Lavrov also said that he and Kerry agreed to maintain contacts between Moscow and Washington on a regular basis to exchange assessments of the situation.

Some Must Decide on Syria

Lavrov told Bloomberg that the US "obsession" with overthrowing Assad is not helping resolve the Syrian conflict.

"Some external players must answer the question of who presents a greater threat, Assad or the Islamic State," Lavrov said.

© AP Photo / website of Islamic State
US-led Coalition Needs Help of Syrian Authorities to Defeat ISIL – Lavrov
He added that the Syrian conflict can only be resolved politically, based on the communique agreed on during the Geneva II conference on Syria.

The American bombing of ISIL-held Syrian territory without its government's agreement was also a mistake, Lavrov said, calling the decision to begin the bombing campaign without a United Nations Security Council (UNSC) resolution regrettable.