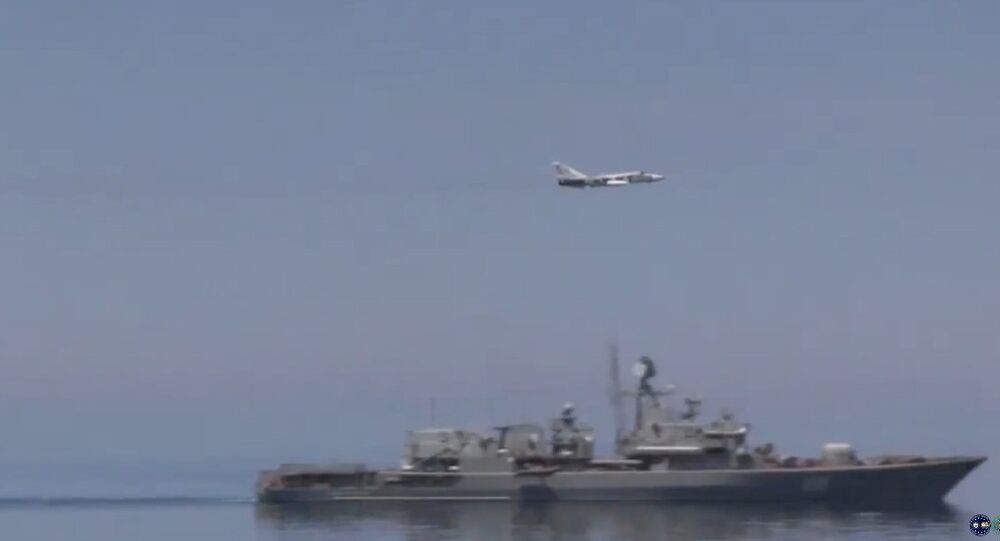 The US Navy released videos of the missile destroyer USS Ross' interactions with Russian Su-24 aircraft in the Black Sea.

The US Navy Sixth Fleet released a video showing a Russian Su-24 flying over the US Navy's USS Ross and the Ukrainian Navy's Hetman Sahaidachny in the Black Sea.

Russian military sources previously told RIA Novosti that the US Navy presence in the Black Sea gives Russian pilots the opportunity to train penetrating the ships' air defenses. On Saturday, a Russian military source in Crimea said that Su-24 jets were scrambled to warn off US Navy destroyer USS Ross after the ship was reported to be acting provocatively by monitoring stations. The US Navy denied that the USS Ross was acting aggressively and said that the ship continued on its mission after the jets returned to base.

"These ships' crews are doubtlessly conducting exercises in repelling air attacks from our planes, which gives our pilots the opportunity to gain experience in maneuvering and conducting aerial reconnaissance both in the range of anti-air systems and outside their range," a source in Russia's military told RIA Novosti in April.

In the 18-second video dated June 1, a Russian Su-24 flies over a group of ships, including the USS Ross and the Ukrainian Navy flagship Hetman Sahaidachny. According to the US Navy, the USS Ross' sailors observed that the Su-24 was not armed with missiles.

The US Navy also released video of its the June 30 interaction with Russian jets.

The 43-second video depicts part of the USS Ross' interaction with a single Russian Su-24 aircraft on Saturday. Several Su-24 aircraft were dispatched to the area of the ship, according to the Russian military source. The US Navy later appended its initial release to say that the Su-24 had no missiles on board.

US Navy Reveals Details of Ship's Interaction with Russian Jets