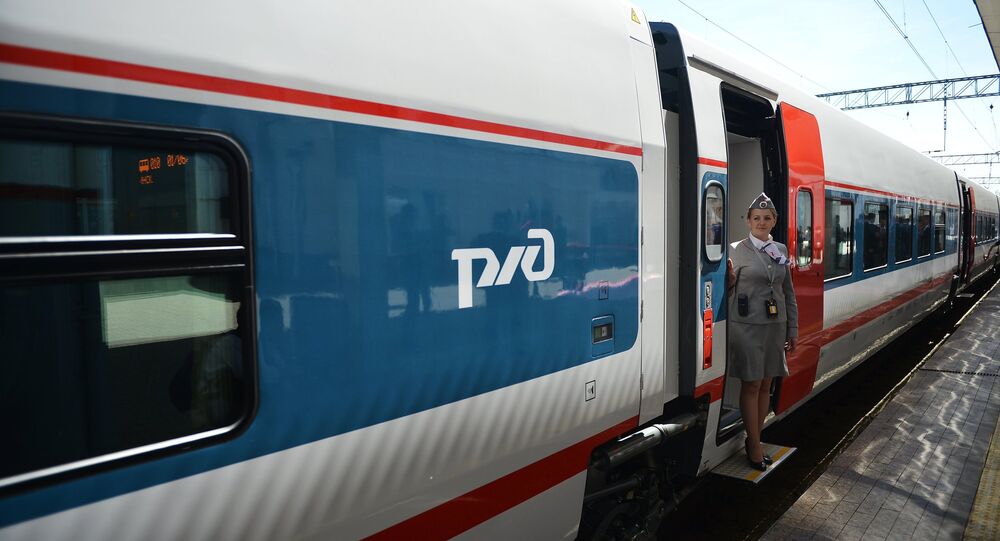 This Train From Spain Runs Through the Russian Plain!

Departing on Monday from Moscow for its new Moscow-Nizhny Novgorod route, the Strizh will make the 425 kilometer trip in three hours and thirty-five minutes, accounting for several stops in cities along the way. This shaves over two-and-a-half hours off the time an ordinary train takes for the journey. The train will accelerate to up to 200 km an hour during the trip.

Russian Railways introduced four Strizh trains, feature first, second and VIP class cars, as well as buffet and restaurant cars. The rail cars are said to feature all the modern conveniences and safety features one might expect, including air conditioning, Wi-Fi and ecological toilets, as well as fire alarms, satellite monitoring and communications.

The rolling stock, purchased by Russian Railways from Spanish company Talgo, is also equipped with passive tilt technology, which saves time through higher speed travel on wide curves in the road, and reduces the effects of centrifugal forces on the occupants on corners at high speed, greatly improving passenger comfort.

© Sputnik / Ramil Sitdikov
All Aboard! Passengers take their seats aboard the Strizh high speed train.

The train's locomotive is a Russian-made electric passenger locomotive EP-20-010, a Transmashholding design built by the Novocherkassk Electric Locomotive Plant in southern Russia. The train was designed in cooperation between Transmashholding and French rail transport firm Alstom.

© Wikipedia / Gwinogradow
The new EP20 passenger locomotive, seen here on the Moscow-Adler route.
© Sputnik / Vladimir Baranov
Ten Things Americans Might Find Odd About the Way Russians Live
Tickets for the train range from 900 rubles ($17 US) for a second class seat to 5,000 rubles ($94) for a two person coupe.

Another three Strizh trains equipped with mechanisms allowing for the automatic change of track gauge from the Russian standard of 1,520 mm to Europe's 1,435 mm are set to arrive in Russia in the near future, and will begin service on the Moscow-Berlin route in December.