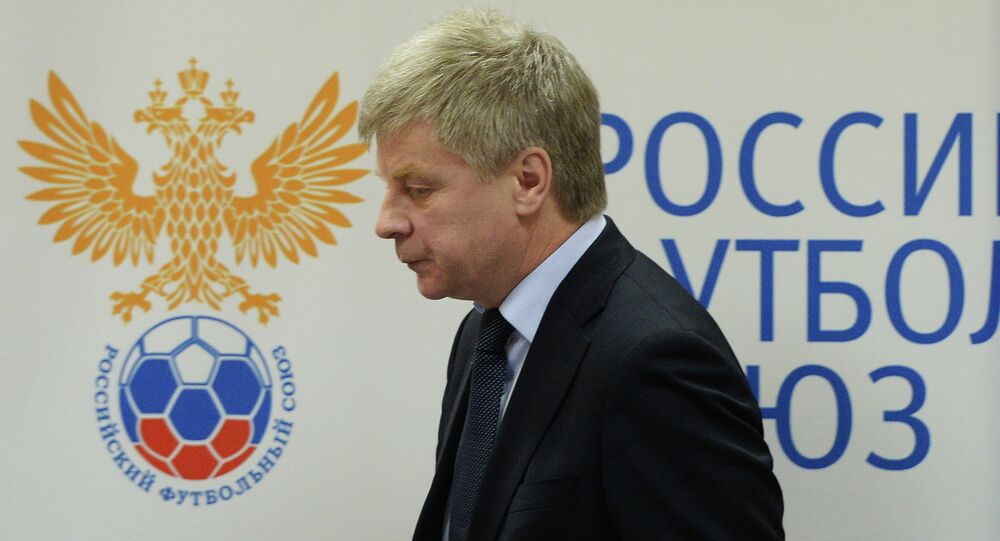 Russia's association football governing body voted to oust its president after a heated debate about the organization's financial woes.

The president of Russia's chief association football governing body was ousted amid revelations about the organization's financial insolvency on Sunday.

The FIFA member organization is in charge of Russian professional and amateur leagues and its insolvency would threaten the Russian team's performance at the 2018 World Cup. Tolstykh's opponents charged him with an inability to find a sponsor while he claimed that the issue was professional teams' refusal to share funds.

While corruption allegations have plagued FIFA, the international football governing body, the audit of the Russian Football Union (RFS) did not find any lack of transparency or mishandling of funds.

The Russian Football Union's First Vice-President Nikita Simonyan was appointed the organization's president after the election. Despite heated speeches, Tolstykh was thanked for his service with a standing applause at Simonyan's request.

Other members of the governing body accused Tolstykh of failing to find a sponsor and failing to deal adequately with organizational issues. The executive director of Russia's Football Premier League (RFPL) Sergei Cheban brought up a recent case when a team had to be transported on a hearse due to a lack of transportation.

Tolstykh was elected president of the Russian Football Union (RFS) for a four-year term in 2012, but received a vote of no confidence in March by the organization's executive committee.

© AP Photo / Elise Amendola
US Disappointed With Sepp Blatter’s Re-Election as FIFA President
The RFS control commission revealed that the organization faces a high risk of bankruptcy, and that its debts and expenses would have to be restructured. During his tenure as president of the RFS, Tolstykh decentralized the organization to reduce the president's influence over the board. However, the organization now faces debts of $15.9 million, almost half of which is overdue, while also running a deficit of $3.44 million in 2014.

According to Tolstykh, the $2.5 billion of revenue generated by professional team sponsorships would be more than enough to change Russian association football, and that professional clubs spent $152.9 million to attract foreign talent in 2014.

President of Russia's professional RFPL Sergei Pryadkin struck back against Tolstykh, saying that the revenue generated by professional teams is needed to train new and existing players for the world championship.

"What does the money of 16 premier league clubs have to do with this? Well, let's have clubs not provide for academies, not make worthy players. Where will our national team be? What rating will we have?" Pryadkin said.

While Tolstykh is accused of bringing about the organization's financial woes, he has never been accused of a lack of transparency.

"I'm very glad that none of the speakers mentioned the word 'corruption' or other extremely unpleasant terms. There are shortcomings, they need to be dealt with," Tolstykh said.

After arguments by both sides, the conference decided to take a vote on dismissing Tolstykh by secret ballot based on his proposal.