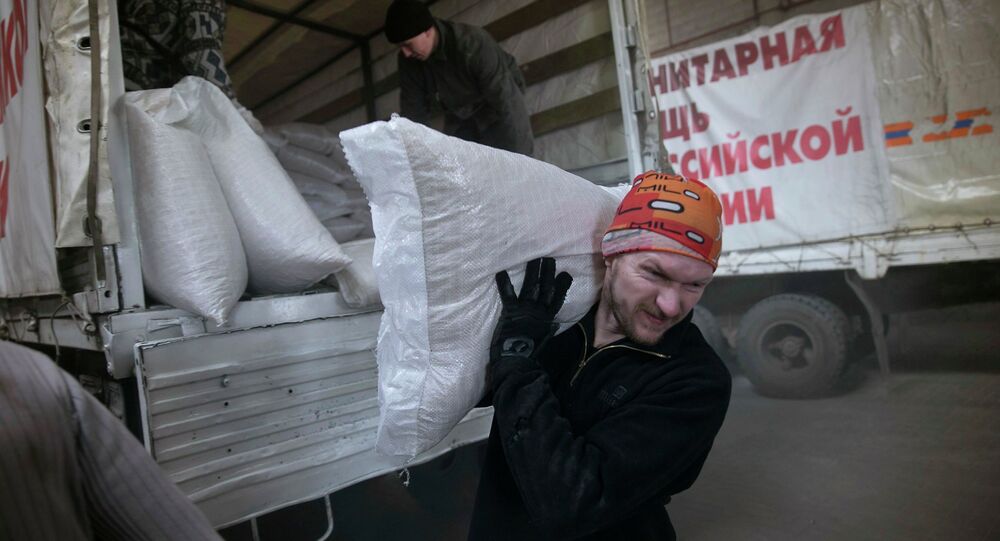 The 28th Russian humanitarian convoy for residents of Ukraine’s southeastern regions (Donbas) will leave for Donetsk and Luhansk on Thursday, carrying over 1,000 metric tons of aid to the crisis-hit areas.

MOSCOW (Sputnik) – The convoy will consist of over 100 vehicles, half of which will go to the Donetsk region, while the rest will head for Luhansk, a representative of the Russian Emergencies Ministry told RIA Novosti on Wednesday.

The humanitarian aid will include food, building materials and medicine.

Last week, Russia’s 27th humanitarian convoy successfully made it to Donbas despite numerous complicated administrative restrictions that impede the process of aid delivery to the region.

Russia has been consistently delivering aid to the self-proclaimed people’s republics of Donetsk and Luhansk (DPR and LPR) since August, 2014.

Donbas residents are on the brink of a humanitarian catastrophe in the aftermath of the military operation that Kiev launched in southeastern Ukraine in April, 2014, to suppress local independence supporters.

The region has also been suffering from an economic blockade imposed by Ukrainian President Petro Poroshenko in November, 2014, which led to all state-funded health, educational and social protection organizations being withdrawn from Donbas.