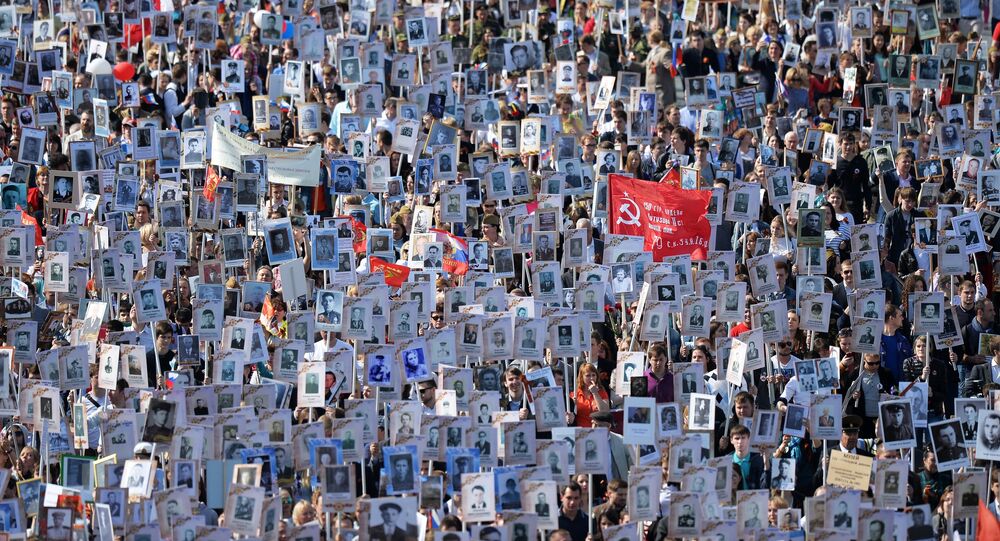 Hundreds of thousands of Muscovites are taking part in the so-called 'Immortal Regiment' march, carrying photographs of their relatives in memory of those who took part in the Great Patriotic War (a term used in Russia and other former Soviet republics to describe hostilities on the eastern fronts of World War II in 1941-1945).

The organizers of the march called on everyone who wants to pay tribute to their relatives perished during the years of the war, to take to the streets across Russia in a symbolic action.

As the head of the vast column reached Red Square, it was joined by President Putin, who held a photograph of his late father, who fought in WWII.

© REUTERS / Tatyana Makeyeva
People hold a banner, a replica of the so-called Victory Standard which was erected at the top of the Reichstag building in Berlin at the end of World War Two, as they take part in the Immortal Regiment march during the Victory Day celebrations in central Moscow, Russia, May 9, 2015

"I think that my father, like millions of ordinary soldiers, and he was an ordinary soldier, has all the right to walk through this [Red] square," President Putin told the journalists.

The Immortal Regiment action was first held in the Siberian city of Tomsk in 2012. In 2013, it had already spread to 120 cities with Kazakhstan and Ukrainian joining the event, gathering in total about 200,000 people.

© Sputnik / Host photo agency
March of Immortal Regiment on Red Square. Pictured on the wall of the State Historical Museum is the Order of the Patriotic War (left) and the Order of Victory (right)

Last year the Immortal Regiment was joined by Israel, Kyrgyzstan and Belarus. This year the event already took place in the United States and is expected to be held several cities of Norway, the German capital of Berlin, Dublin, Beirut, Vienna and other cities.

According to official data, about 27 million Soviet citizens, including both civilians and servicemen, died in the Great Patriotic War against Nazi Germany in 1941-1945.