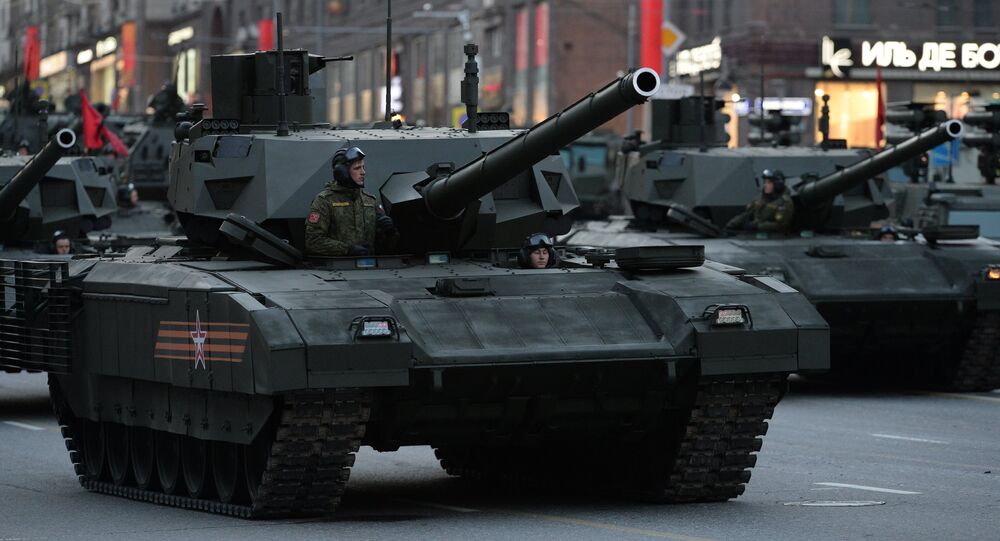 The T-14 Armata tank will be the main feature of the May Victory Day Parade on the Red Square in Moscow. The technical innovations of Armata platfrom make the Russian tank an absolute leader among its Western analogues, a US media agency claims.

© Sputnik / Ramil Sitdikov
Russian T-14 Armata: Most Powerful Tank in the World in Details
Russia’s cutting-edge Armata tank which was previously unveiled during a Victory Day parade rehearsal in Moscow will surpass all Western versions, according to a US media agency.

Before the final rehearsal of the May 9 parade the T-14 tank was shown to the public with its turret masked with fabric. Monday was the first time the Armata was shown uncovered.

The tank is going to steal the show at the Victory Day parade on the Red Square, Moscow on May 9.

In addition, more than 16,500 servicemen and nearly 200 pieces of weaponry will be involved in the event.

The key feature of the new tank is its unmanned remotely-controlled turret, with three crew members seated in an armored capsule at the front of the tank's hull. The crew controls the tank’s gun remotely.

© Sputnik / Valery Melnikov
Russia’s All-New Armata Tank Rolls Over the Competition - Stern
Such a construction increases the safety of the crew and its firing efficiency. The technical innovations used in designing the Armata make the Russian tank an absolute leader among its Western analogues, AP says.

Engineers designed the Armata platform also to be used for other combat vehicles, including an infantry combat vehicle and a self-propelled gun. The versatility of the platform will contribute to reducing production costs and to facilitating repair and maintenance works.

Currently the Russian Military is undergoing a major-scale re-armament program which is planned to be completed by 2020. According to the plan, the army will receive 2,300 T-14 tanks. However, the program could be hampered by the economic crisis Russia is going through now, AP claimed.

On May 9, a military parade commemorating the 70th anniversary of the victory in the Great Patriotic War will be held on Red Square. The parade will be the largest in its history. According to tradition, Russia has invited many foreign guests to the commemoration. This year, 68 foreign leaders were invited as well as leaders of the United Nations, the UNESCO, the European Union and the Council of Europe.

© Sputnik / Vadim Savitskii
Russia to Unveil Brand New Military Hardware at Victory Day Parade
The motorcade march during the event will be led by historic ceremonial units including a T-34 medium tank and a SU-100 self-propelled gun. The motorcade will comprise of the Msta-S self-propelled howitzer, the Koalitsiya-SV self-propelled gun, the Iskander missile system, the Tigr and Taifun armored vehicles, BTR-82A armored personnel vehicle, the T-90 tank, the Buk-M2 and Tor-M2U air-defense systems, Pantsir-S1 anti-aircraft missile complex, and the S-400 missile launcher of the Russian Aerospace Defense Forces.

The victory parade will end with a flight by Russian Air Force aircraft. It will feature planes and helicopters of the army, military transport and long-range aviation. Visitors will have a chance to see the Mi-35, Ansat-U and Mi-28N helicopters, the Su-30, Su-35 and the Yak-130 jet fighters, and the Su-34, Tu-22M3, Tu-95 and Tu-160 bombers.

Earlier, the Russian Defense Ministry posted on its website a photo gallery of its latest and advanced pieces of military equipment which will be involved in the Victory Parade on May 9. The website features high-resolution pictures of never-before-seen weaponry, including the Armata medium tank, the Koalitsiya-SV self-propelled gun, the Kornet-D anti-tank mobile guided weapon, the Kurganets-25 infantry combat vehicle, and the Kurganets-25 armored personnel carrier.