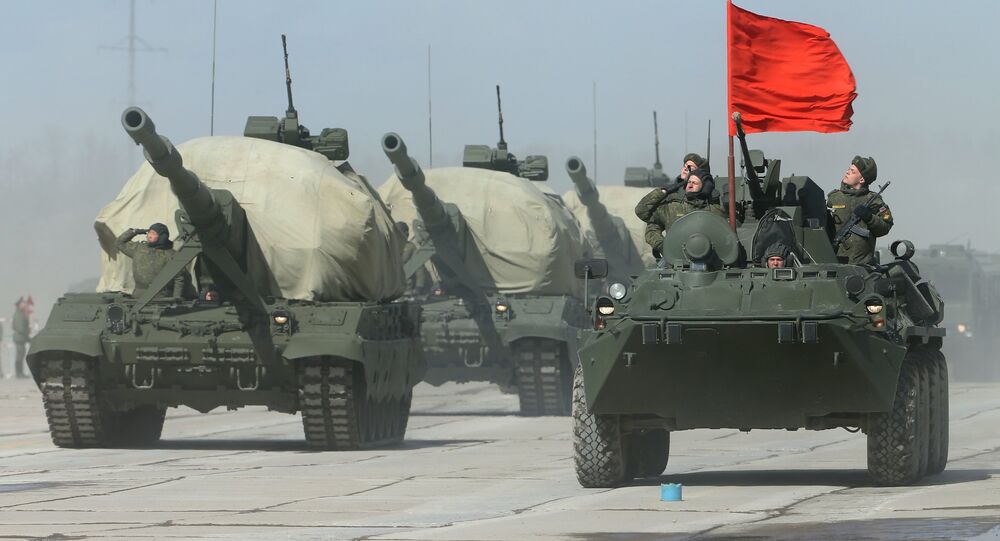 "There will be on display for the first time state-of-the-art, brand new weapons systems like, for example, the intercontinental ballistic missile called Yars," Ivanov said in the run-up to the celebrations.

The upcoming event will be the biggest military parade ever held in modern Russia. The Russian Defense Ministry has previously confirmed that it will roll out a new-generation Armata tank with an unmanned remotely-controlled turret.

According to Ivanov, who is the chairman of the organizing committee, this year's premieres include high-end armored personnel carriers, high-precision artillery systems, as well as the famous Sukhoi Su-30 and Sukhoi Su-35 fighter jets.

© Sputnik / Vladimir Astapkovich
Russian Air Power Takes to the Skies for Parade Preparations
12
Over 15,000 troops, of which some will be wearing wartime Soviet uniforms, will take part, Ivanov said, likening it to the British tradition of "trooping the colors." The historical part of the march-by will feature the legendary T-34 tanks, the mainstay of the Red Army in the 1940s.

Ivanov added that the Russian government has allocated a total of 28.5 billion rubles ($550 million) for the anniversary commemorations of the end of World War II, 25 billion of which will be spent on housing and social benefits for WWII veterans.

The Victory Parade on Moscow's Red Square will kick off on May 9 at 10:00 a.m. local time (08:00 GMT). Parades will be held in 150 cities across Russia, as well as in Belarus, Kyrgyzstan, and Armenia, among other nations.