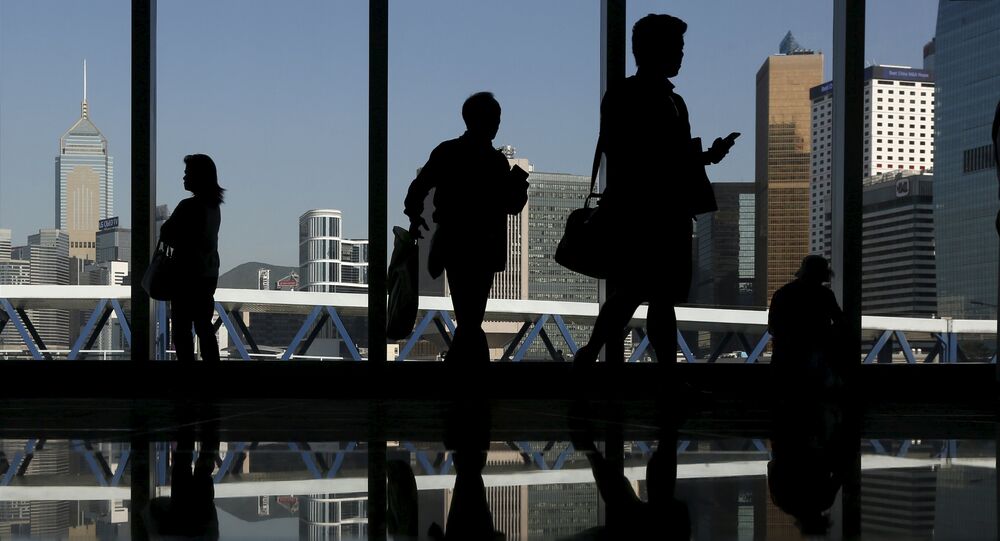 The supreme monetary authority in mainland China is discussing full-scale bond-buying, disguised as a commercial initiative, preparing the grounds for the next wave of lowering borrowing costs in Asia.

Kristian Rouz — The two-day policy meeting of the US Federal Reserve is starting later on Tuesday, and the regulator is generally expected to postpone its looming base interest rate hike to September from June. The most likely reason is not related to the poor performance of the US economy, in fact the recent earnings season saw America's businesses doing better-than-expected, despite a stronger dollar hurting their rapidly shrinking overseas operations.

© AP Photo / Richard Drew
Oil Prices Slide Amidst Unprecedented Build-Up in US, EU Crude Stockpiles
No, what really concerns the Fed is the global situation, as most nations in Asia-Pacific, mainland China topping the list, are preparing for the next round of money-printing and bond-buying, thus rendering the US regulator wary of its own policy moves. Inflation data in Asian nations suggest their monetary policies are not loose enough to balance on the edge of a large-scale economic downturn, besides, cheaper domestic money liquidity provides a solid boost to their manufacturing industries. The US Federal Reserve is facing the choice now; tightening at a faster pace will be more painful, but will spur domestic manufacturing due to a quicker reshoring of facilities, while postponing the interest hike will leave enough room for the US companies to pull out of the overseas markets while retaining a large part of their international presence, gradually adjusting to the changing monetary environment.

Meanwhile, mainland China is preparing a move potentially wiping the US multinationals off their market, edging closer to a full-scale stimulus.

However, there is a hard choice for the Asian nations as well. The lower their own interest goes, the more attractive the US economy becomes for investment money. The possibility of losing  investment in domestic industries will hurt their own growth prospects, turning the whole global monetary war into a lose-lose situation.

© REUTERS / Jonathan Ernst
Wall Street Hit by Losses in Biotech, Health Stocks as GOP Plans Crackdown on Obamacare
That said, on Tuesday mainland China announced to its main regulator, People's Bank of China (PBOC), that it is looking into possibly expanding their scope of lending in hopes to accelerate the economic growth. As the mainland's provincial debts have put several regions on the brink of a default, PBOC is seeking a way to spur demand for the regional governments' bonds, issued to fund their excessive obligations.

PBOC might introduce what they call the ‘Pledged Supplementary Lending program', which would allow commercial banks to buy local government's bonds, no matter whether they like it or not. This is, in fact, a full-scale nationwide bond-buying scheme, though covert, in other words, an integral part of the so-called ‘quantitative easing.'

China's total provincial debt reached some $2.6 trillion earlier this year. Now, if China implements the discussed initiative, a wave of further easing will roll all across the region, bringing local currencies down and pushing manufacturing in Japan, S Korea and Taiwan to the new historic highs, along with their presence in the global market.

"The easing cycle across the region isn't over," said Frederic Neumann of the Hong Kong-based HSBC Holdings Plc. "China can't do the job for everyone else. Once that becomes clear, expect more rate cuts from Korea to India, and many places in between."

Australia will be the first in line to further cut rates, as it is closely linked to mainland China's economy, resulting in a deeper plunge in commodities prices. South Korea, Indonesia and Japan will also expand their stimuli as inflation is slow in these nations. Consequently, manufactured goods like electronics and automobiles, as well as crude oil, will depreciate.

The first and foremost effect of the US Fed interest hike will be a further strengthening of the dollar, meaning the global price for made-in-Asia goods will decline dramatically. Consequently, the US will be pushed toward greater economic isolationism, but the influx of investment capital, fleeing the volatile Asia, might compensate for the decline in global competitiveness of the American enterprises.

In the end, the losses on the easing side of the ‘war' will extend their gains. Asian central banks will eventually be forced to increase rates as early as end of 2015, as a stronger dollar will spur inflation in these nations greatly.