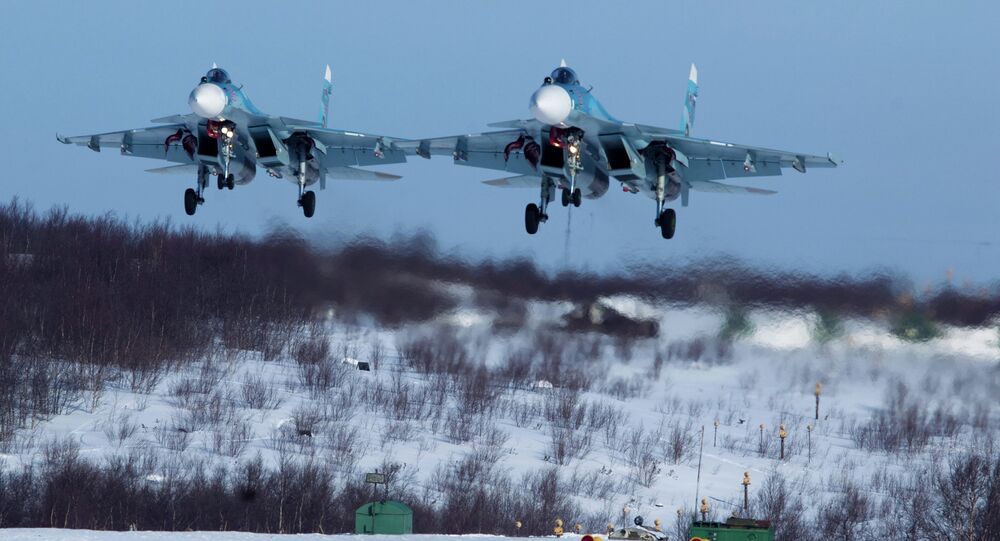 The fighter jets of the Russian Northern Fleet have performed daytime and nighttime exercises on off-shore target interception and air fight.

Russian naval pilots have conducted military drills on off-shore target interception and air fight. The flights on Russia’s fighter jets, Su-33 and naval trainer Su-25UTG have been performed during daytime and at night.

© Sputnik / Vladimir Melnikov
Russia Ends Su-34 Strike-Fighter Exercises in Country's South
"Special attention has been paid to exercising the elements of elementary, advanced and stunt aerobatics at all altitudes, speeds, and accelerations. The crews of the carrier-based fighters also completed military exercises in intercepting off-shore high-altitude and high-speed targets, exercised skills in air combat using attack and defense maneuvers at mid- and low-level altitudes,” the Northern Fleet press service said in a statement.

The Su-33 is a single-seat ship-based STOBAR fighter, with upward folding wings and horizontal tail surfaces (for hangar storage); it is equipped with probe-and-drogue flight refuelling capability. The Su-33 is designed for defence of naval ships from aerial threats.