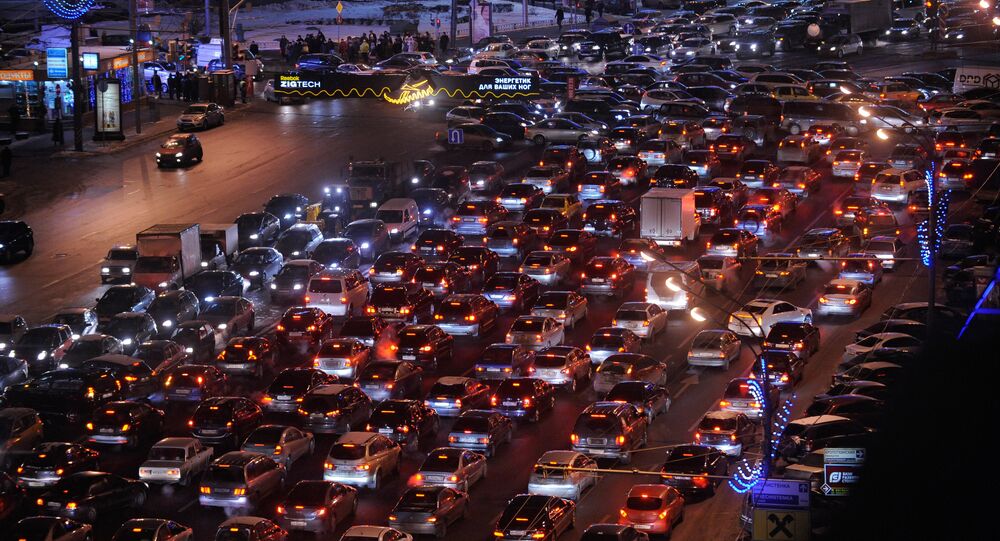 According to a new international ranking by Dutch navigation and mapping company TomTom, Moscow traffic is no longer considered the worst in the world.

Using GPS measurements from its traffic database to rank cities by congestion level hour-by-hour and for peak periods, TomTom measures congestion by the percentage increase in overall travel time compared to when traffic is moving freely.

The report finds that Moscow, which ranked first in 2012 and 2013, now ranks fourth, with 50 percent congestion levels, meaning that travel during peak times raises travel time by half. TomTom's 2012 and 2013 ratings showed that the city's burgeoning car ownership and the authorities frantic attempts to build sufficient new road infrastructure saw increases in travel times by up to 66 percent.

© AP Photo / Delphi Corp.
Almost Driverless: Autonomous Car Completes 3,400-Mile Road Trip
Moscow city authorities took pride in the drop in the infamous rating, the city releasing a press statement noting that "in only a year's time, the road transport situation in the city has improved significantly," and voicing satisfaction in having reduced peak level congestion by 16 percent.

Istanbul, Mexico City, and Rio de Janeiro ranked ahead of Moscow, congestion levels there ranging from 51 to 58 percent.

St. Petersburg also made the top ten, coming in at number seven, with a congestion level of 44 percent. Other former Eastern Bloc cities to make the list include the Romanian capital of Bucharest (eighth place), and Poland's Warsaw (ninth). Warsaw apparently has even more to brag about than Moscow, having come in number three last year, and number one in 2011. Los Angeles rounded out the top ten, the only city the United States or Western Europe to make the ranking. Rome, London and Marseille made the top 20.

© REUTERS / Stringer
The Automobile-Centric Culture
Historic Russian cities' road infrastructure, most of it build during the Soviet period, wasn't meant to handle the massive increase in car ownership which has occurred over the past 15 years, resulting in constant traffic jams during peak hours and a literal turf war with authorities and pedestrians for parking space. In addition to launching an ambitious infrastructure development project to alleviate the situation, Moscow authorities have launched a number of programs aimed at reducing illegal parking.
...
Reddit
Google+
Blogger
Pinterest
StumbleUpon
Telegram
WhatsApp
142