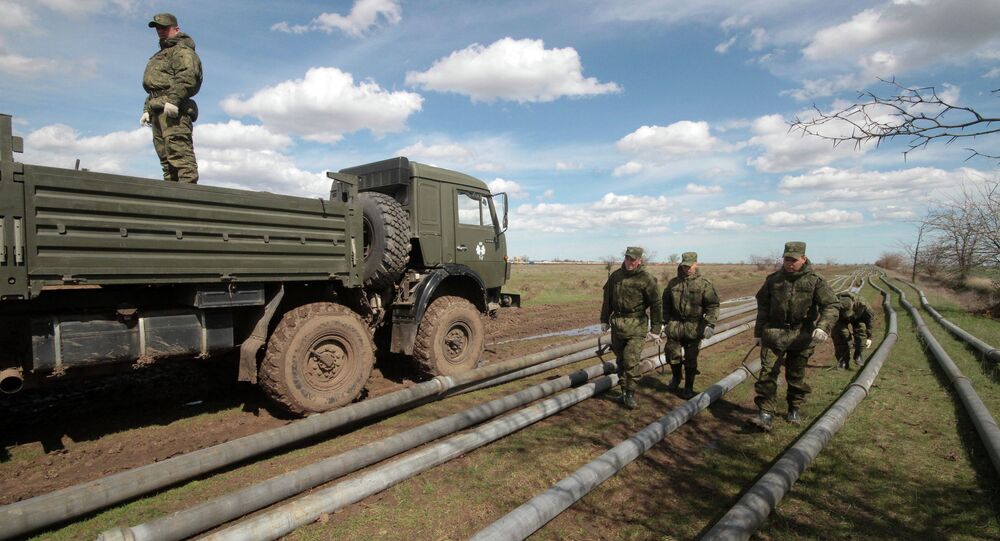 Russian geologists have tapped a fresh water supply in Crimea which will allow for the delivery of water throughout the peninsula via new pipelines; the Russian Defense Ministry has sought to provide Crimea with more water since Ukraine’s new authorities blocked access a year ago.

© Sputnik / Yuriy Lashov
Russia Did Not Threaten West With Nuclear Weapons to Protect Crimea – Kremlin
Units of the Russian Defense Ministry have started supply water to Crimea using new pipelines; the goal is to fill the main waterway of the Crimean Peninsula, the North Crimean Canal, and to create a network of pipelines to supply water to the largest cities in Crimea's eastern areas, news reports said.

At least forty kilometers of pipes have already been laid, with water being supplied to the North Crimean Canal, which was blocked by the Ukrainian authorities a year ago.

A spate of wells have been drilled in the eastern part of Crimea, where geologists have discovered three aquifers located at a depth of 200 meters.

Water from these sources is expected to be delivered to the drought-stricken Kerch Peninsula in eastern Crimea; the projected capacity stands at 175,000 cubic meters per day.

Igor Val, head of the Crimean Committee of Water Resources, said that he remains optimistic about the peninsula's water supply ahead of the beginning of the summer holiday season in Crimea.

The new network of pipelines is due to pump an average of forty million cubic meters per year; it will be enough to supply water to the 500,000 people who currently reside on the Kerch Peninsula.

Be-200 Amphibious Plane Shines During Firefighting Drills in Crimea