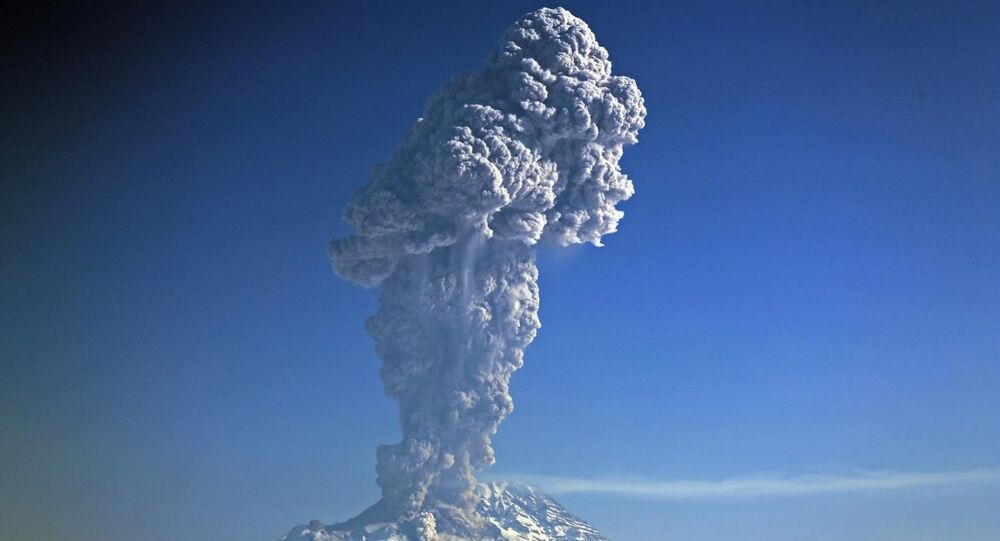 “According to seismic data, Shiveluch spewed a column of ash 10 km above sea level. It spread in the north western direction for up to 40 km before clearing,” the Kamchatka Branch of the Russian Academy of Science's Geophysical Service said.

No residential areas are located in the path of the ash.

The next step in aviation codes is red, the highest, meaning an eruption is underway with a significant emission of ash entering the atmosphere.

Sheveluch is the northernmost active volcano on the Kamchatka Peninsula and one of its biggest, at 2,444 m in height. It features two peaks: Old Shiveluch, an ancient caldera, and the currently-active Young Shiveluch.

© Photo : AttivitaSolare / Twitter
Russia's Shiveluch Volcano Wakes Up
Its base is between 40 and 50 km in diameter. It erupted in 1964; its tops were blown up, giving it a double crater. The northern crater is 1.7 km in diameter and the southern one is around 2 km.

Water in the Shiveluch volcano crater is natural in color. Usually, it happens when water contains certain natural chemical components like sulfur. In this case, moraine has had an additional effect.

The volcano is one of five currently erupting or restless in Kamchatka; the others are Zhupanovsky and Karmysky, which feature the same orange color aviation code, as well as Bezymianny and Klyuchevsoy, which currently have a yellow minor color code.