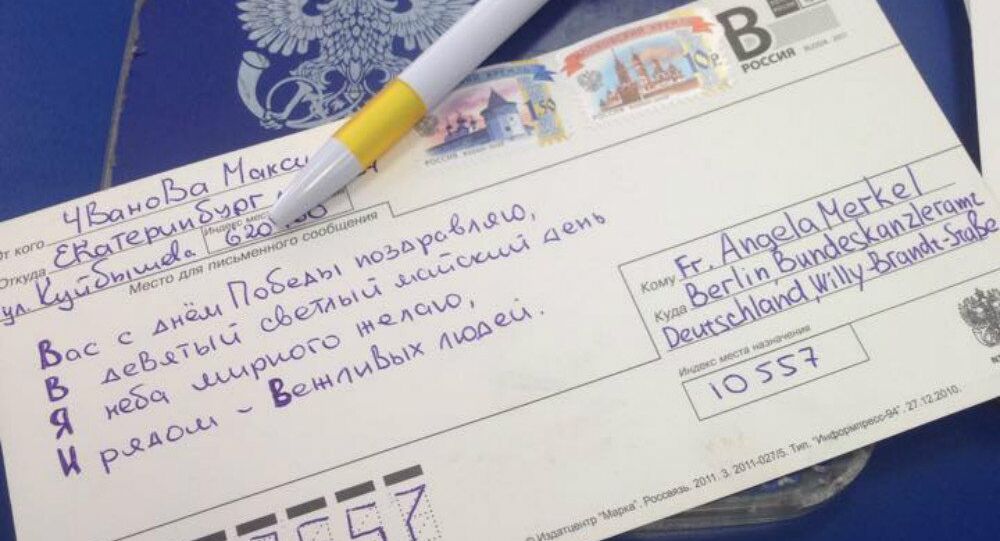 "May 9th - 70 years. Victory is Ours. A Celebration for Those Who Raised Europe From its Knees."

Russian Internet users have begun a flash mob campaign to congratulate Angela Merkel on Victory Day after the German Chancellor announced that she would not be visiting Moscow for anniversary festivities.

"I suggest a flash mob — 'Congratulate Angela Merkel on Victory Day!'" Vadim Raskin, a doctor from Novokuznetsk, a Siberian city, wrote in a Facebook post that started it all, adding the address of the German Chancellery, where the letters would be sent.

A Russian political news site, PolitRussia, has jumped on the bandwagon, creating images for users to print out and sent to Merkel as letters and postcards.

politrussia.com
"May 9th - 70 years. Victory is Ours. A Celebration for Those Who Raised Europe From its Knees."

"Whether Angela Merkel comes to Moscow or not, we believe it to be right, from all our hearts, to congratulate her on the May 9 holiday!" PolitRussia wrote to its readers.

politrussia.com
"May 9th - 70 years. Victory is Ours. A Celebration for Those Who Raised Europe From its Knees."

Calling on readers to not write insults to the German Chancellor, who does understand Russian, the website stated that if Merkel does make the visit to Moscow, the congratulations will be a symbol of respect for her decision.

politrussia.com
"May 9th. 70 Years Since Victory. A Feat Has No Age."

The campaign seeks to spread awareness of the importance of Victory Day as a day of memory for those who defeated Nazi Germany, and as a reminder to Western leaders of the timeless sacrifice that was made to achieve it.