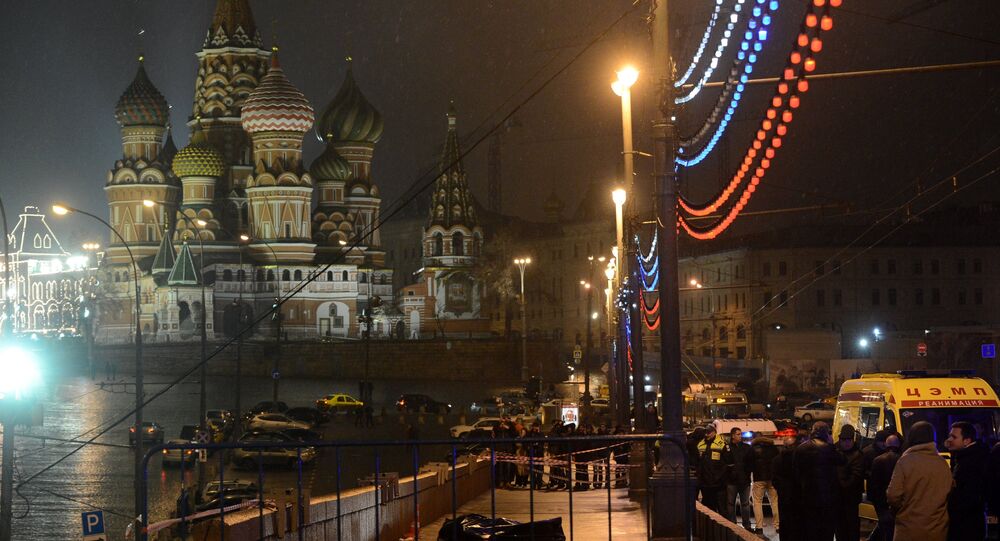 A newly-emerged witness to the murder of Russian opposition politician Boris Nemtsov contradicts the confessions provided by the case's suspects (one of which was later withdrawn). The witness describes a different man and car model, and noticed that two suspicious women were present who left the crime scene in a hurry.

© Sputnik / Sergey Chernyh
All Five Suspects in Murder of Politician Nemtsov Arrested in Moscow
Anna Duritskaya, the 23-year-old model who was walking with Nemtsov at the time of his killing, is no longer regarded as the sole witness to his murder, according to Russia’s daily newspaper Kommersant.

A 27-year-old manager, who is referred to by the newspaper only by his first name, Evgeny, had been following the couple at a short distance.

The young man, however, was wearing headphones which were connected to his smartphone and was listening to loud music and looking at his device rather than paying attention to the two. He therefore neither heard the shots nor saw the exact moment of the attack.

When he finally glanced up, he saw a crowd of people rather than a lone couple. The man was already lying on the ground, his partner was standing to the side, and a third man (supposedly the killer) was fleeing the scene, jumping over the street curb separating the sidewalk from the road.

© AP Photo / Dmitry Lovetsky
Suspect Pleads Guilty to Taking Part in Russian Politician Nemtsov's Murder
Evgeny only saw the back of the fleeing man, but he described him as of middle height and rather skinny, with dark, probably wavy hair. He also noted that the man didn't have a coat on, despite the wind and cold. He wore dark blue jeans, as well as a seemingly oversized, baggy, dark-colored hooded sweatshirt. This description doesn’t match that of Zaur Dadayev, who earlier pleaded guilty to the murder but later backtracked on his statement. Dadayev, the newspaper says, is a rather big man with an athletic figure.

The escapee jumped into the rear seat of a Russian-made car, probably a white AvtoVAZ Lada Priora sedan. The investigation, however, reports that the attackers were in a ZAZ Sens.

© Sputnik / Ekaterina Imasheva
Witness Describes Killer of Russian Politician Boris Nemtsov
The witness noticed one more couple at the scene. There were two women: a young woman and a middle-aged woman in a black fur-coat. They had a quick word with Nemtsov’s partner and hurriedly left the scene, using a staircase leading down from the bridge.

The lawyers of Zaur Dadayev are planning to use the above discrepancies as an evidence of his noninvolvement in the murder. The lawyers suggest their defendant might have perjured himself.

Earlier in March, five suspects were detained in connection with the murder. Neither suspect has acknowledged his guilt.